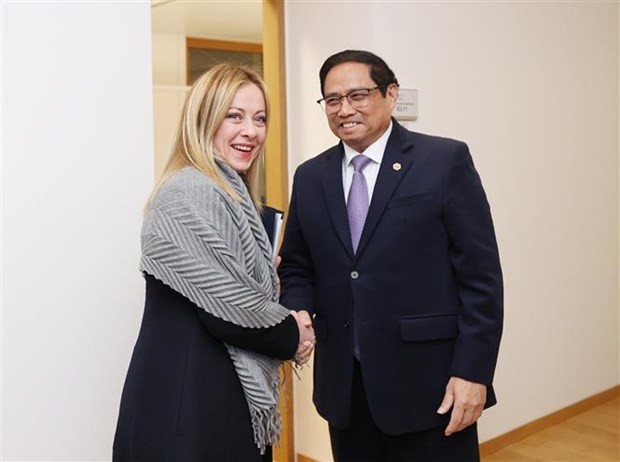 Scholz, for his part, affirmed that Germany wishes to coordinate with Vietnam in promoting their strategic partnership in an intensive, effective, pragmatic and comprehensive manner.

The two sides agreed to support and coordinate with each other in regional and international issues, significantly contributing to peace, stability and prosperity in the two regions and the world at large.

Meeting Italian Prime Minister Giorgia Meloni, Chinh stressed the importance Vietnam attaches to its relations with Italy – an important member of the EU and G7, and also a leading economic and development partner of Vietnam in Europe.

He thanked Italy for its donation of Covid-19 vaccines to Vietnam, and suggested the two countries utilize cooperation opportunities generated by the EU-Vietnam Free Trade Agreement (EVFTA) to raise bilateral trade to US$7 billion in the next 2-3 years.

Meloni agreed with her Vietnamese counterpart’s proposals and suggested the two countries continue to effectively materialize bilateral cooperation mechanisms, including the 4th defense dialogue in Italy next year.

PM Chinh invited Meloni to visit Vietnam, and the Italian PM accepted the invitation with pleasure.

The Vietnamese PM and his Portuguese counterpart António Costa agreed on measures to bolster the bilateral relations in the time ahead, especially cooperation in economy, trade and investment. 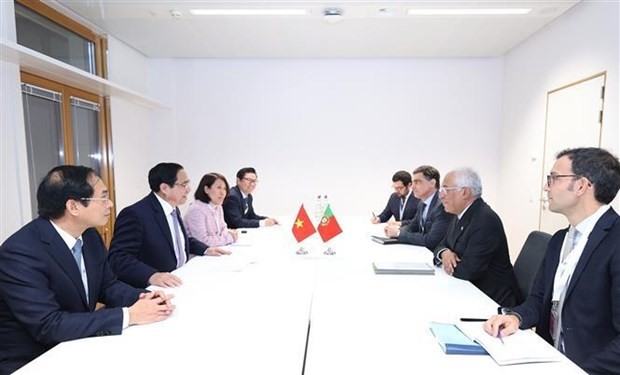 In a meeting with Portuguese PM António Costa (Photo: VNA)
PM Chinh said the two countries should make the best use of the EVFTA and called on Portugal to create optimal conditions for Vietnamese agricultural and aquatic products to make deeper inroads into the market and the EU, soon ratify the EVIPA and back the EU to soon remove the “yellow card” warning. The two sides would boost cooperation in other fields like tourism, science-technology, green growth and digital transformation, he continued. In reply, Costa committed that Portugal will provide maximum support so that the warning will be removed, saying the Portuguese Government backs and hopes for the ratification of the EVIPA in 2023, and stands ready to facilitate the access of Vietnamese seasonal fruits and fishery products to the EU and Portugal. The PM suggested the two countries forge cooperation in infrastructure, renewable energy and electronic financing, and launch green investment projects in Vietnam. The leaders concurred to enhance exchanges and collaboration in culture, tourism, education-training and national defense in the time ahead. At another meeting with Czech PM Petr Fiala, Mr. Chinh emphasized that Vietnam is willing to create conditions for key products of the Czech Republic such as crystal, beer, food, equipment, machinery and spare parts to enter the Southeast Asian nation, and appealed to the European country to facilitate the exports of Vietnamese garments-textiles, footwear, farm produce, seafood and tropical fruits. 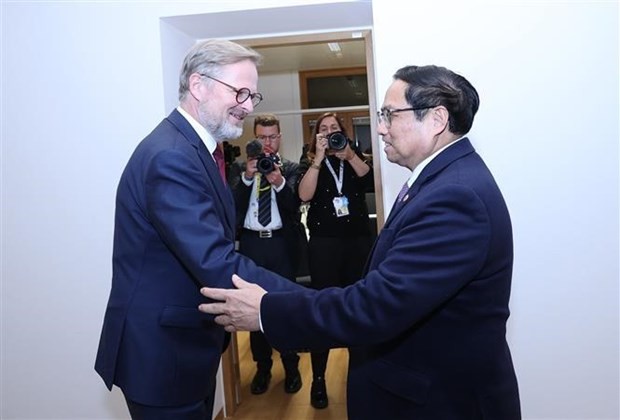 PM Pham Minh Chinh meets Czech PM Petr Fiala (Photo: VNA)
He urged the country to bolster educational cooperation with Vietnam, especially granting more scholarships to its students, and support the EU to remove the “yellow card” warning. Fiala said the two countries should deepen their bilateral ties, effectively implement the EVFTA, soon sign a memorandum of understanding on cooperation in auto production, including electric cars, and intensify collaboration in national defense. The leader noted his hope for the early establishment of a direct air route between the two countries to enhance people-to-people exchange and boost tourism. PM Chinh took the occasion to invite PM Fiala to visit Vietnam and the latter accepted the invitation with pleasure. On this occasion, PM Chinh also had a meeting with Polish PM Mateusz Morawiecki, during which the Vietnamese leader called for efforts to raise two-way trade to $3 billion in the next 2-3 years. Morawiecki said he hopes that Vietnam and Poland will strengthen cooperation in trade, pharmacy, shipbuilding, national defense, and machinery manufacturing. PM Chinh and his Greek counterpart Kyriákos Mitsotákis agreed to beef up cooperation in economy and trade, considering it a prime priority in the bilateral ties. Mitsotákis said the two countries should foster partnership in infrastructure, maritime transport, shipbuilding and tourism, promising that Greece will create conditions for Vietnamese produce to access the market. At another meeting with President of the European Commission Ursula von der Leyen, PM Chinh stressed that Vietnam treasures its relations with the EU, and suggested the two sides further coordinate to effectively realize the EVFTA. 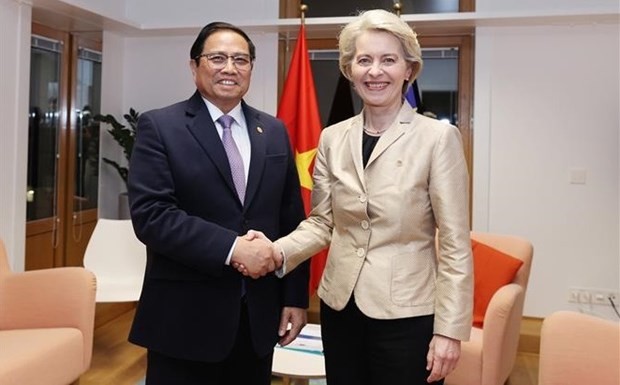 PM Pham Minh Chinh meets President of the European Commission Ursula von der Leyen (Photo: VNA)
He called on the EU to help Vietnam in maritime economic development, facilitate the export of Vietnamese products, soon remove the “yellow card” warning, and support the country in economic restructuring and sustainable development. PM Chinh proposed the EC urge EU members to ratify the EVIPA to open up new investment opportunities for the two sides. Leyen, for her part, recognized the progress the two sides have made in handling the “yellow card”, and affirmed that the EU strongly supports Vietnam in sustainable maritime economic development and biodiversity conservation, and stands ready to assist the nation in sustainable agricultural development, and cooperate with the country in ensuring food security in the region and the world. On this occasion, PM Chinh had a meeting with Croatia’s PM Andrej Plenković, during which the leaders concurred to step up economic cooperation, and accelerate the implementation of projects in potential areas, particularly navigation, transportation, light industry and clean energy. Mr. Chinh also met with President of Lithuania Gitanas Nauseda, Dutch PM Mark Rutte and Luxembourg PM Xavier Bettel, President of the European Council Charles Michel, and Romanian President Klaus Iohannis.
VNA