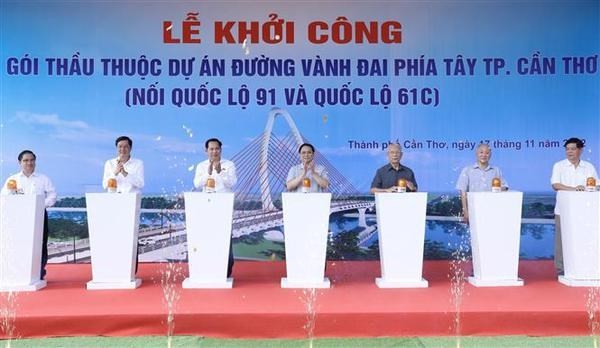 The road has a total length of 19.4km and surface width of 11m, with 24 middle and small bridges, and one large bridge. It crosses O Mon, Binh Thuy, Phong Dien, Ninh Kieu and Cai Rang districts.

The project, which has a total investment of over VND3.83 trillion (US$154.38 million), is scheduled to complete in 2026 and expected to facilitate transport activities between Can Tho and neighboring localities, reducing congestion and expanding the city’s development space in the west.

Addressing the ground-breaking ceremony, PM Chinh said that infrastructure is one of the three strategic focuses of Vietnam to complete its development goals towards 2030. 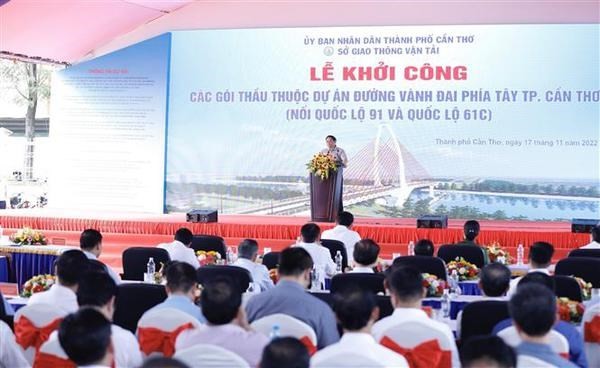 Prime Minister Pham Minh Chinh addresses the ceremony (Photo: VNA)
Highlighting the Party and State’s special attention to the promotion of socio-economic development of Can Tho and the Mekong Delta region in general, the PM noted that in this tenure, the State has provided the largest ever amount of capital for the infrastructure development in the Mekong Delta region. Meanwhile, other resources have also been mobilized for transport infrastructure development in Can Tho in all fields, he added.

The PM held that the western belt road of Can Tho will help form an important outer belt axis connecting important traffic ones of the Mekong Delta region, contributing to the creation of an inter-regional transport system, linking Can Tho city with neighboring localities, and making a strong impetus to promote socio-economic and tourism development for the city, and expanding a new development space for Can Tho.

The Government leader asked the local Party Organization and administration at all levels of Can Tho to create favorable conditions for the implementation of the project while paying attention to ensuring good living conditions for 589 households that have to move to give space for the project.