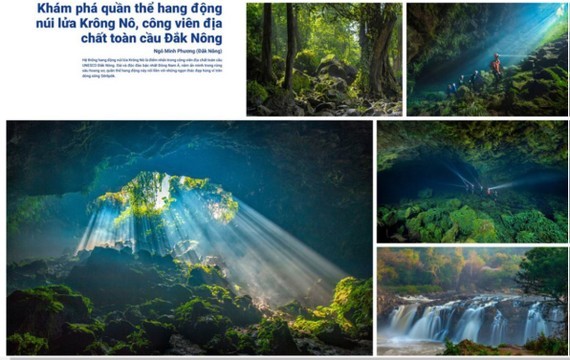 The collection of photos featuring the natural beauty of the Krong No volcanic cave system in the Central Highlands province of Dak Nong by photographer Ngo Minh Phuong wins the VAPA’s golden cup.

The photo set got the top prize at the photo contest seeking for excellent pictures, photographic works in critical theory and photobooks in 2022. The competition was launched by the VAPA.

This year’s event received 288 entries, including 93 pictures that won domestic photo contests, 85 others that won international competitions and 110 elective works.

Krong No volcanic cave system was found in 2007 with nearly 50 caves and a total length of 10,000 meters. It has been recorded as the longest one in Southeast Asia by the Japan Volcanic Cave Association. Scientists discovered traces of prehistoric people around 6000-7000 years ago in the volcanic cave area.

Krong No volcanic cave system is the most special feature of Dak Nong Geological Park that was recognized as a UNESCO Global Geopark at the 209th session of the UNESCO Executive Board held in Paris, France in July 2020.