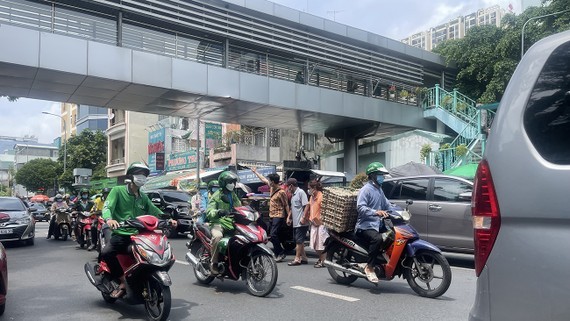 The pedestrian overpass in front of Binh Dan Hospital

Binh Dan Hospital in Ho Chi Minh City’s District 3 consists of two buildings separated by Dien Bien Phu Street. This is one of the crowded roads in the southern largest city with a high traffic density but patients have to cross Dien Bien Phu Street to go to different treatment wards. Faced with this situation, the city has built and put into use a pedestrian overpass right in front of the gate of Binh Dan Hospital so that people, especially patients, can easily travel between the two buildings.

However, the pedestrian bridge is mainly used only by hospital staff currently while most people, patients and visitors prefer jaywalking instead of using pedestrian bridges. During more than an hour of observation, the recorded number of people using the pedestrian overpass can only be counted on the fingers of one hand.

Similarly, pedestrian bridges and underground passages on the following roads Pham Van Dong in Thu Duc City, Vo Van Kiet in District 1, Nguyen Van Cu in District 5, and No Trang Long in front of the Tumor Hospital in Binh Thanh District are largely unused. Street vendor Nguyen Thi Huong in front of Binh Dan Hospital said that people don’t want to use the pedestrian overpass because the bridge was built too high and steep stairs which are inconvenient for people, especially patients, to get up and down difficultly.

With jaywalking common, it seems citizens are more afraid of miscreants in the tunnels than crossing busy streets. The pedestrian overpass in the Southern Province of Dong Nai’s Bien Hoa City in front of Pouchen Vietnam crossing the National Highway 1K was built to help workers cross the highway easily and safely. However, thousands of workers still ignore the overpass but climb over the iron fence of the 1.5m high median to cross the road. At rush hour, various kinds of dump trucks, trucks, and passenger cars on the National Highway 1K but many groups of workers still defied the danger, crossing the road in front of the car.

According to statistics from the Center for Management of Road Traffic Infrastructure of Ho Chi Minh City, there are currently more than 20 pedestrian overpasses and four underground tunnels citywide, but people refused to use many of them due to their low awareness of safety. The center has recommended competent forces to strengthen propaganda and handle violators due to illegal crossing of the road.

Mr. Nao Thien Anh Minh, Deputy Head of the Traffic Safety Committee of Dong Nai Province, said that in the inner city of Bien Hoa alone, many pedestrian overpasses have been built for people, workers, and students to cross the road for their safety and prevention of traffic congestion.

But in fact, passersby intentionally violate the traffic regulation by crossing the medians and fences at locations with pedestrian overpasses, endangering themselves and vehicle drivers, especially the overpass area in front of the gate of Pouchen Vietnam in the National Highway 1K, overpass at Mega Meket supermarket, Bui Thi Xuan High School in Nguyen Ai Quoc Street.

According to Mr. Nao Thien Anh Minh, in the coming time, the Traffic Safety Committee of Dong Nai Province will continue to request the Traffic Safety Board of Bien Hoa City, the provincial Department of Education and Training, and leaders of Pouchen Vietnam company to increase strengthen propaganda to raise people’s awareness of overpass benefits At the same time, it is recommended that the functional forces strengthen the strict penalties on those crossing crowded streets directly where pedestrian overpasses were built.

According to the Article 9 of Decree 100/2019 on penalties for pedestrians who violate the prescribed road traffic rules, a fine of between VND 60,000 and VND 100,000 shall be imposed on pedestrians who commit one of the following violations including failing to follow the prescribed road section, crossing the road at the wrong place or unsafe, failing to obey orders or instructions of signal lights, signboards or road markings, except for the violations specified in Clause 2 of this Article.

Moreover, the decree also stipulates that a fine of between VND 100,000 and 200,000 shall be imposed on pedestrians entering the expressway, except for those serving the management and maintenance of the expressway.