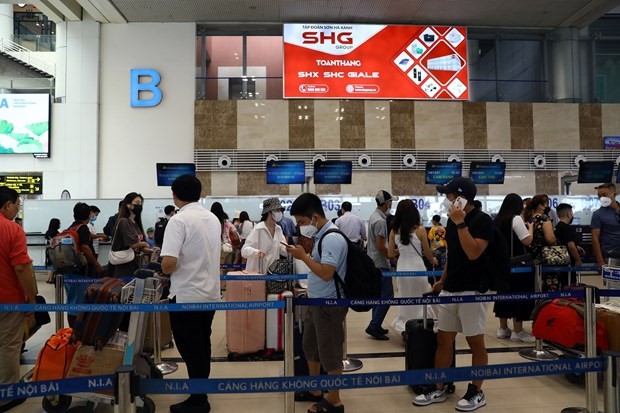 Passengers line up to check in at Noi Bai International Airport on April 29. (Photo: VNA)

To Tu Ha, director of Noi Bai International Airport said it is expected to handle 549 flights on April 29.

The number of travelers at the airport is projected to hit a record of 75,000, surpassing the figure on April 30, 2019 – before the outbreak of the Covid-19 pandemic, he said, adding that the number of visitors to the airport would be 70,000 on the following day (April 30).

Passengers are encouraged to check themselves at selfservice kiosks to avoid missing flights at peak hours.

Meanwhile, a representative at Tan Son Nhat International Airport said it is expected to receive over 100,000 visitors on April 29. He attributed the sharp increase in the number of passengers to a rise in flight frequency and customers’ demand during the holiday.

From April 29 to May 4, there will be approximately 700 flights to and from Tan Son Nhat airport daily on average, according to the Southern Airport Authority.

The number of travelers at the airport is projected at about 105,000, including about 13,000 foreigners. From May 3 to May 4, about 60,000 domestic tourists from provinces are expected to return to Tan Son Nhat airport per day.

The airport authority has requested airlines and related agencies to deploy more personnel during the holiday to ensure the smooth movement of people and vehicles.

About 100 volunteers have been mobilized at the airport to facilitate check-in procedures and security check during the period.