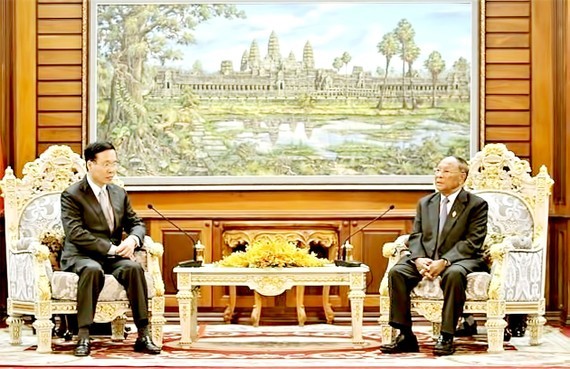 During the meetings with President of the Cambodian People’s Party (CPP) and Prime Minister Hun Sen; CPP Honorary Chairman and President of the National Assembly Heng Samrin; CPP Vice Chairwoman, Deputy PM, head of the CPP Central Committee’s Mass Mobilisation Commission and President of the Cambodia-Vietnam Friendship Association Men Sam An, Thuong affirmed that Vietnam treasures the solidarity and mutual support between the two Parties and countries, which is an objective rule and the most important factor for the stability and development of each country.

Congratulating Cambodia on its great and important achievements under the rule of the King, the leadership of the Senate and NA, and the management of the Government with the CPP at the core and led by PM Hun Sen, he expressed his belief that Cambodia will reap more successes in the process of national construction and development, including the NA election next year.

Vietnam will do its best together with Cambodia to nurture ties between the two Parties and nations for the benefit of the two peoples, and for peace, stability and cooperation in the region and the world, Thuong said.

He suggested both sides work closely together to implement joint statements and signed treaties and agreements, including deepening ties between the two Parties, maintaining existing cooperation mechanisms, strengthening the sharing of information and experience, and holding joint activities during their Friendship Year.

On the occasion, Thuong asked the Cambodian leaders to create favorable conditions for the community of Cambodians of Vietnamese origin and Vietnamese businesses operating in Cambodia, and coordinate with Vietnam in managing and building a border of peace, friendship, cooperation and development.

The Cambodian leaders believed that under the leadership of the CPV led by General Secretary Nguyen Phu Trong, the Vietnamese people will continue earning greater success and successfully implement the resolution adopted by the 13th National Party Congress.

They pledged to, together with Vietnam, protect, foster and pass on the fine bilateral relationship between the two countries to later generations.

They highlighted the significance of ties between the two ruling parties of Vietnam and Cambodia and reached a consensus with the Vietnamese guest on orientations for developing ties between the two Parties and countries, and among the Parties of Vietnam, Laos, Cambodia as well as among the three countries and their mass organizations, people and youths in the near future.