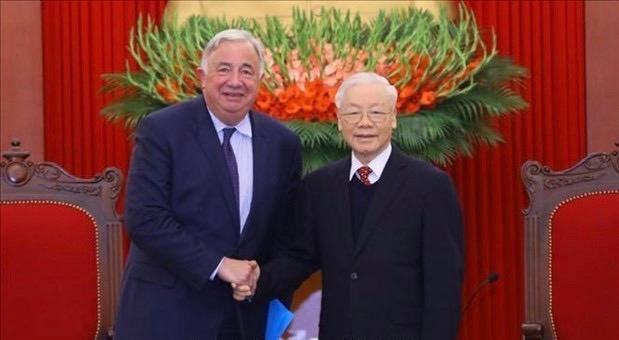 At a reception in Hanoi on December 8 for Larcher, Mr. Trong said the visit is taking place at a time when the two countries are preparing for the 50th founding anniversary of bilateral diplomatic ties and the 10th anniversary of their strategic partnership next year. It is also the first visit by a French Senate leader in 14 years and also the first made by Larcher since he took office.

In its foreign policy of independence, self-reliance, peace, friendship, cooperation and development, multilateralization and diversification of external ties, Vietnam treasures its strategic partnership with France, the Party leader said.

He expressed his delight at the development of the bilateral relations in politics, economy, culture, locality-to-locality and people-to-people exchanges, in which a community of 350,000 Vietnamese living and working in France have been playing an important part.

Speaking highly of the outcomes of talks between the French Senate President and Vietnamese National Assembly Chairman Vuong Dinh Hue, Mr. Trong suggested both sides build on the past achievements to facilitate exchanges and meetings at all levels via the Party, State, parliamentary channels and people-to-people exchanges, as well as offer mutual support at multilateral forums.

He also proposed raising the bilateral strategic partnership to a new development period in a bid to bring benefits the two countries' people in all spheres and contribute to peace, cooperation and development in the region and the world.

Larcher, for his part, informed the host that leaders of the two legislatures had agreed to increase exchanges and meetings between parliamentarians, step up cooperation and share experience among subordinate committees via visits and exchanges.

He noted with pleasure that the strategic partnership between the two nations is developing strongly, intensively and extensively in all spheres.

On this occasion, Mr. Trong asked Larcher to convey his regards to French President Emmanuel Macron and other French leaders.