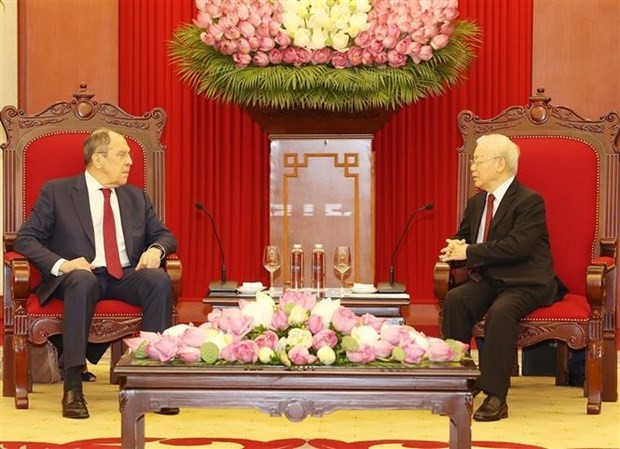 Lauding the political position and leadership role of the CPV in the process of national development and foreign policy of Vietnam, the Russian FM held that the external policy of the CPV and relations between the Vietnamese Party and State, and Russia have been supported by political parties of Russia, reflected by their sound ties with the CPV.

He briefed his host on the outcomes of his talks and meetings with Vietnamese officials, affirming that Russia has attached much importance to the comprehensive strategic partnership with Vietnam, and supported ASEAN's central role in the region.

Lavrov thanked Vietnam for making contributions to the enhancement of Russia-ASEAN relations over the past years, and highlighted Russia’s viewpoints on international issues, including the conflict in Ukraine.

Trong underscored the significance of the Russian FM's visit at a time when the two countries are celebrating the 10th founding anniversary of their comprehensive strategic partnership.

Reviewing important achievements that Vietnam has gained in all fields during the process of comprehensive reform as well as the country's recognized position and prestige in the international arena, the Party leader affirmed that Vietnam always treasures and memorizes the assistance from international friends, including the former Soviet Union and Russia at present, during its past struggles for national independence and periods of national development.

Within its foreign policy of independence, self-reliance, peace, friendship, cooperation and development, multilateralization and diversification of external relations, Vietnam has attached great importance to its comprehensive strategic partnership and cooperation with Russia, he said.

Trong stated Vietnam’s viewpoints on international issues of mutual concern in line with the country’s consistent external policy, including the use of dialogues and negotiations for the peaceful settlement of differences and international disputes.

With this external policy and the spirit of being a friend, a trustworthy and an active and responsible member of the international community, Vietnam is willing to make contributions to the promotion of international peace, stability and cooperation, he stressed.

The Party leader asked Lavrov to convey his regards to Russian President Vladimir Putin and Chairman of the United Russia Party Dmitry Medvedev.