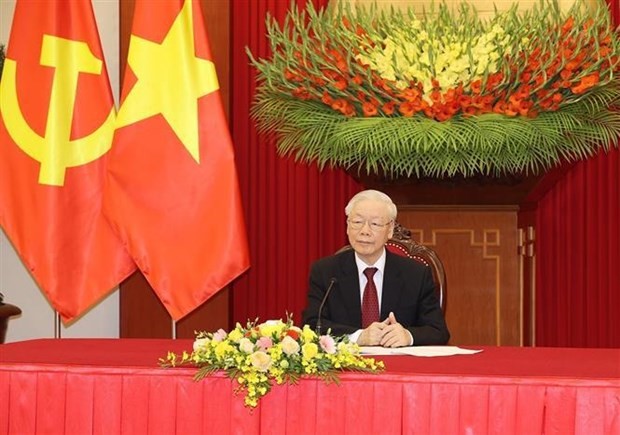 During the talks, Trong informed the German leader about Vietnam's achievements after more than 35 years of Doi moi (renewal), as well as the country's development path, foreign policy, and goal of becoming a developed country by 2045.

He stated that Vietnam attaches importance to its strategic partnership with Germany as part of its foreign policy of multilateralization and diversification, and of being a friend, reliable partner and an active and responsible member in the international community.

The Party leader proposed the two countries enhance political relations, including exchanges of high-ranking delegations, and promote the relations between the Communist Party of Vietnam and political parties of Germany, including the ruling Social Democratic Party.

Trong also suggested lifting cooperation between the two countries in investment, trade, science, technology, education, national defense and security to a new level in conformity with their strategic partnership.

The Party chief proposed the German Government continue to create favorable conditions for Vietnamese nationals living and working in Germany.

Chancellor Olaf Scholz congratulated Vietnam for its achievements in national development and its enhanced role and position in the international arena. He affirmed that Germany attaches great importance to the nations’ strategic partnership which is developing robustly and has much potential for further growth.

He suggested the two countries step up political cooperation bilaterally and at international forums; as well as their partnership in economy, including optimizing the advantages of the EVFTA and promoting Germany-invested projects in Vietnam, in climate change adaptation, and in Covid-19 prevention and control.

The leaders also discussed regional and international issues. Regarding the East Sea, they agreed on the need to maintain peace, stability, cooperation and development and to respect international laws, including the 1982 United Nations Convention on the Law of the Sea (UNCLOS).

The Chancellor mentioned Germany's viewpoint about the situation in Ukraine.

In response, Trong affirmed Vietnam’s consistent policy to respect fundamental principles of the United Nations, including respect for independence, sovereignty and territorial integrity of nations, peaceful settlement of international disputes without use of force and threat of use of force.

He wished that all related parties promote dialogues and negotiations to end fighting and restore peace, on the basis of respecting the legitimate interests of all parties, in line with international law.

The Party chief took the occasion to invite the German Chancellor to visit Vietnam and the later accepted the invitation with pleasure.