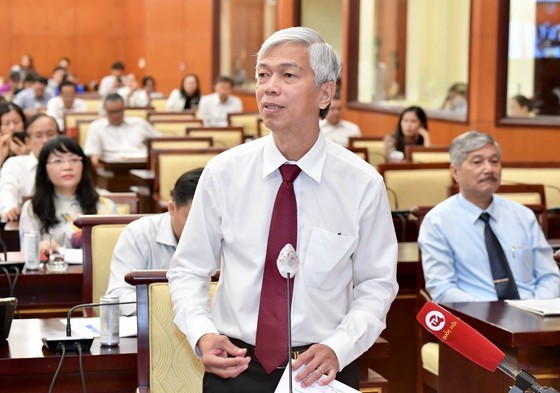 Today’s eighth meeting of the 10th-tenure People's Council of Ho Chi Minh City continued with thematic supervision at the meeting on the implementation of the National Assembly’s Resolution 131 on the organization of urban government in the southern largest city.

Vice Chairman Hoan said that the city has implemented urban government for two years, and there exist some problems. Thus, the municipal People's Committee will have more complete solutions for the urban government’s more effective operation.

Mr. Hoan added that e-government and urban government need to go hand in hand to improve the efficiency of state management. When implementing urban government, the construction of e-government becomes more and more necessary. Worse, the information technology system is outdated.

Regarding solutions, Vice Chairman Hoan said that the city is directing in the direction of unifying infrastructure, data and data integration, and unifying content to put in public services to serve residents. On that basis, Ho Chi Minh City is starting to integrate with the National Public Service Portal, digitizing some content related to land, planning, construction, and transportation, linking with industries such as land, and tax.

Regarding resources, the Vice Chairman of Ho Chi Minh City People's Committee affirmed that the city needs a lot of resources. Thus, in addition to the Ho Chi Minh City budget to build the initial foundation, the participation of businesses and people is required. In the long term, according to Mr. Vo Van Hoan, authorities in the southern metropolis have been considering hiring services from businesses.

Furthermore, deputy Cao Thanh Binh questioned the fact that the city has 17 projects that have been delayed or suspended. But 11 projects of them are located in Thu Duc city, including 5 school projects and 6 traffic projects.

Mr. Hoang Tung, Chairman of Thu Duc City People's Committee, admitted that at the time when Thu Duc City was established, there were some work jams that needed to be rectified.

Thu Duc City has had many solutions to improve the working process and shorten the time to process documents for inhabitants. Up to now, 68/82 procedures have been provided with online public services. In 2023, these procedures will be completed basically.

The chairman of Thu Duc City People's Committee shared that the medium-term public investment portfolio of Thu Duc City currently is mostly transitional projects from the previous period. Very few delayed projects are new. He explained that the 11 projects that have been reduced or delayed are because Ho Chi Minh City needs to focus on many other projects; subsequently, the City is temporarily rebalancing capital and will continue to implement them in the near future.

Thu Duc City will work with other sectors in making concerted efforts to ensure the disbursement progress and construction quality of projects, for instance, the disbursement of large projects such as Ring Road 3 and other important projects, said Chairman Tung.