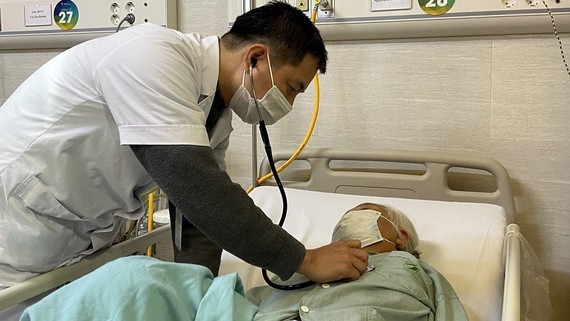 The northern provinces are entering the mid-winter with the temperature dropping quite low. In the mountains, the temperature dropped to 11-14 degrees Celsius while it is 16-18 degree Celsius in the plains. A cold wave is affecting people's health, especially the elderly.

At the Hanoi-based Central Lung Hospital, the number of inpatients for chronic lung diseases has increased sharply during the past week, sometimes increasing to 120 percent-130 percent compared to before. At the Department of Chronic Pulmonary Diseases, there are normally only about 200 patients per month whereas this number is now very high. Doctor Vu Van Thanh, Head of the Department of Chronic Pulmonary Diseases, said that the department's 55 beds are now full of patients including many serious patients; worse, many of them are being given oxygen, mechanical ventilation, and even some cases need invasive mechanical ventilation and intubation as their airways are blocked or damaged and they can't breathe spontaneously. In particular, people with chronic obstructive pulmonary disease suffered laryngospasms, creating dangerous acute episodes when the temperature suddenly dropped.

Elsewhere in the capital city, the Emergency and Stroke Department of the Central Geriatric Hospital, the number of people hospitalized due to stroke increased by 70 percent-80 percent. Doctor Tran Quang Thang, Head of the Emergency and Stroke Department, said that cold weather is the leading danger for elderly people with a history of hypertension, and the risk of stroke is very high if they don’t receive timely treatment.

The Central Acupuncture Hospital has seen an increased number of patients with peripheral nerve 7 paralyses. Currently, the hospital on average receives about 20 cases of 7th nerve palsy every day, which is mainly caused by sudden exposure to cold air.

To prevent diseases for the elderly in the cold weather period, doctors recommended that they keep their bodies warm and not go out in the early morning or late at night. Moreover, they should drink a lot of warm water in the early morning when waking up, as well as have a reasonable diet to improve resistance. Particularly, people with high blood pressure are advised to have good control of blood pressure and heart rate. When a person has signs of suspected stroke, it is necessary to quickly bring them to a specialized medical facility within at least the first 4-5 hours for timely emergency treatment.

Prime Minister Pham Minh Chinh on January 29 asked the southern province of Dong Nai to complete the handover of cleared ground for the first-stage construction of Long Thanh international airport by the end of this first quarter.