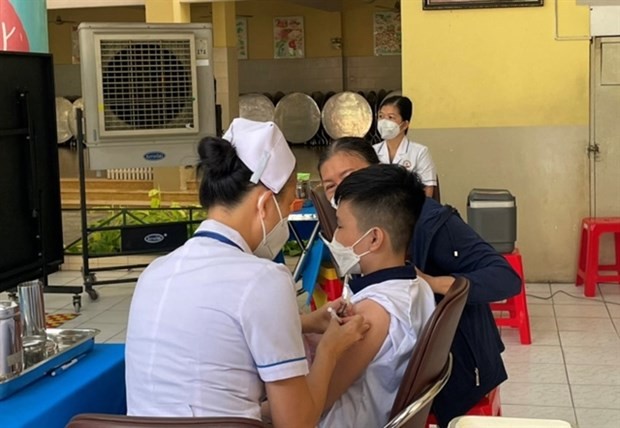 A student gets vaccinated against Covid-19. Children under 12 years old have lower antibodies than other groups due to low vaccine coverage. (Photo: VNA)

Of that, the proportion of people with natural Covid antibodies has reached more than 88 percent.

The department has published the data in its study on community immunity jointly conducted by HCMC’s Center for Disease Control, the HCMC Hospital for Tropical Diseases and the Oxford University Clinical Research Unit in September 2022.

The research team conducted the study on 839 people from new-born to those over 70 years old of both genders and living in different areas in the city.

The team collected and analysed blood samples to measure the proportion of anti-nucleocapsid antibodies, which developed in people with prior infection with SARS-CoV-2, and anti-spike protein antibodies of those who have been infected with the virus or got vaccinated.

The results showed that 88.2 percent of the total samples now have antibodies from past Covid infections and up to 98.7 percent have antibodies after being fully vaccinated or infected with the virus.

In particular, the positive rate of natural antibodies in different age groups is quite similar, ranging from 86 percent to 97 percent in age groups from under five to 70 years old. The rate for those more than 70 years old is 76 percent.

The research team concluded that the high rate of people in HCMC with antibodies to Covid-19 has formed after the re-opening of schools and the surge of the Omicron variant infection in early March.

The high percentage of people with antibodies has indicated the coverage of the vaccine as well as the role of natural infection in creating antibodies against SARS-CoV-2 in the community.

Only a very small percentage (1.3 percent) of the population does not have anti-spike protein antibodies, but this does not mean they are not protected against SARS-CoV-2 because this study does not assess the cellular immune response.

The group of children under 12 years old has lower anti-spike protein antibodies than other groups, which is consistent with the fact that vaccine coverage in this group is lower than in other groups.

However, the threshold of positive antibody concentration to ensure protection against the Omicron variant has remained unknown.

Currently, scientists around the world are still studying the issue.

The city’s Department of Health has cautioned that vaccination is the safest method to protect people’s health against the virus and maintain community immunity. It has encouraged people to take children between 5 and 11 years old to get vaccinated.