The typhoon named Talas which was located at 16.9 degrees north latitude and 111.4 degrees east longitude, at 240 kilometers of the south-eastwards yesterday. The strongest wind near the center gusted level 8- 10.
In next 24 hours, the storm is predicted to move the west- northwestwards at 15- 20 kilometers per hour. 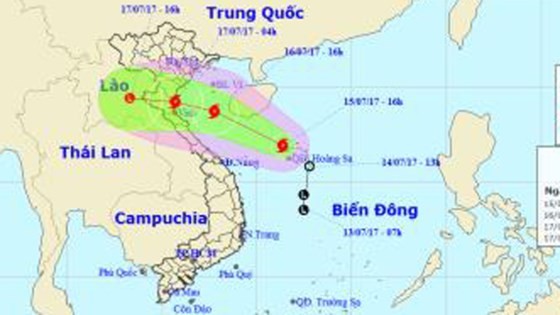 Because of its influence, the Gulf of Tonkin will see strong wind of level 6-10, big wave of 3- 5 meters and sea rough.

In next 24- 36 hours, typhoon ‘Talas’ is likely to move the west- northwestwards at 15- 20 kilometers an hour.
By 4pm tomorrow, around 19.2 degrees north latitude and 105.7 degrees east longitude of the coastal provinces from Nam Dinh to Ha Tinh will be able to hit by the storm. The strongest wind near the center will gust 60-75 kilometers an hour.
The storm is forecast to continue moving the west- northwestwards at 15- 20 kilometers, and approaching the mainland of the provinces from Thanh Hoa to Ha Tinh before it is forecast to be weakened into a low- pressure zone.
From the midnight of Sunday, the coastal provinces from Hai Phong to Ha Tinh will see powerful wind of level 6- 10. The northern and north- central provinces are warned to appear the heavy rains. The highest rainfall in Thanh Hoa and Nghe An will reach at 250- 350 mm, at 150- 250 mm in the Red River Delta and Ha Tinh province, at 100- 200 mm in Hoa Binh, Son La, Phu Tho, Yen Bai and Dien Bien, and at 50- 150 mm in the north and central provinces from Quang Binh to Thua Thien- Hue.
A flooding is predicted to appear in the upstream river of Red and Thai Binh River with its floodwater of 2- 3 meters, and 4-6 meters on the local rivers of Thanh Hoa, Nghe An and Ha Tinh.