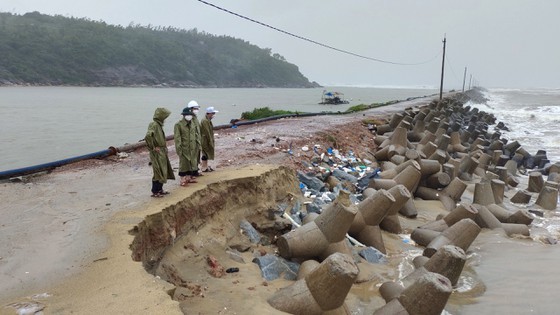 Thanks to proactive preparedness ahead of the storm, there was no serious damage to people and properties.
In Binh Thuan, typhoon Rai left one dead, sank five and damaged three fishing boats. Furtherly, hurricane-forced winds devastated 90 percent of trees, 27 solar panels and two poles for wind gauge, and blew up 500- meter house roof in the Southwest Cay and Da Nam islands.

According to the National Center for Hydrology Meteorology Forecasting, the tropical storm tended to downgrade gradually and moved northward after getting close to the waters off the mid-Central and south- Central regions.

Due to the influence of the ninth storm connecting with the current cold air, the provinces from Quang Nam to Khanh Hoa have experienced medium-heavy rains.

From last night, the system changed its path to north-northeastward at a speed of 15-20 kilometers an hour.

Storm Rai is heading north.
The updated weather news related to typhoon Rai showed that its eye was around 16.8 degrees north latitude and 110.9 degrees east longitude in the area of west- Paracel Islands at 7 a.m. this morning.
It is forecast that Rai will be located 200 kilometers east of the Paracel Islands with gusty winds of levels 10-13.

In the next 24- 48 hours, the storm is expected to change its path to the northeast and turn into a tropical low-pressure system.