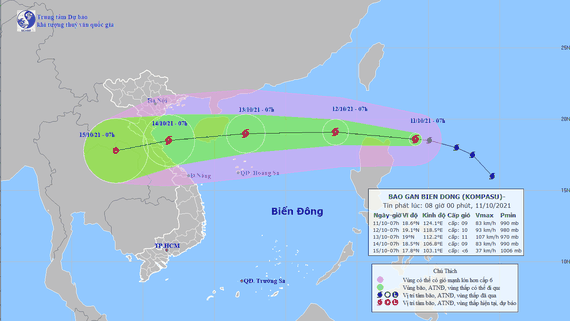 The path of storm Kompasu
Kompasu is forecast to progress rapidly west-northwest at the speeds of 20-25 kilometers an hour and it is expected to enter the East Sea and intensify in the next 24 hours.
By 7 a.m. tomorrow, the eye of Kompasu is able to locate at 19.1 degrees north latitude and 118.5 degrees east longitude, at around 700 kilometers far from the east- northwest of the Paracel Islands with gusty winds of 75-100 kilometers per hour.

In the next 24 to 48 hours, the storm will continue to move rapidly west-southwest at a speed of 25 kilometers an hour.

As of 7 a.m. on October 14, Kompasu will churn the territorial waters from Thanh Hoa to Quang Binh provinces.

Due to the influence of the storm, the northern waters of the East Sea have suffered from blustery winds of level 8-13, big waves of 4-6 meters and rough sea as from this morning.

In the next 72-96 hours, the storm will maintain west- southwest and tend to reduce gradually.