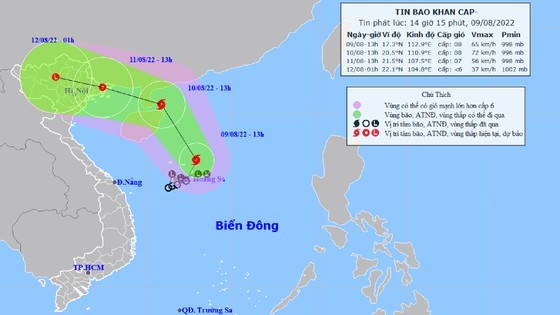 The tropical depression in the East Sea has intensified into storm Mulan moving toward the north.

According to the latest weather news of the National Center for Hydrology Meteorology Forecasting, Mulan was around 300 kilometers southeast of Hainan Island (China) with a speed of up to 110 kilometers an hour.
In the next 24-48 hours, the tropical storm will likely move north and turn toward the northwest and west-northwest. After that, it is expected to begin weakening into a tropical depression on August 11.

Under the influence of the storm, the Gulf of Tonkin including the island districts of Co To and Bach Long Vi will likely experience increased gales and rough surf.

From the nighttime of August 10 to August 12, the Northern region, Thanh Hoa and Nghe An provinces will experience moderate to heavy rainfalls between 100mm and over 250 mm.