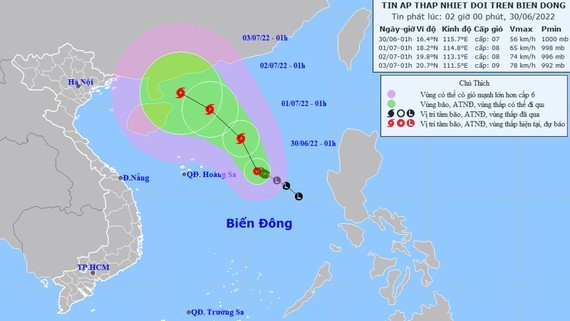 The projected path of the typhoon (Photo: NCHMF)
At 7 a.m. this morning, the center of the storm was about 16 degrees north latitude and 115.3 degrees east longitude, 430km east of the Hoang Sa (Paracel) Archipelago with strongest winds of up to 62-74km per hour (level 8).
In the next 24 hours, the storm is expected to move north-northwest at the speed of 10km an hour and intensify. Until 7am on July 1, the eye of the storm will locate about 410km northeast of the Hoang Sa Archipelago with wind speed of 62-74km per hour (level 8), gusting at level 10.
All ships operating in the East Sea are at high risk, with the level of risk caused by the storm set at level 3.
It is forecasted that in the coming day, the storm will mainly move in the northwest direction at the same speed, possibly getting stronger.
The sea area from central Binh Thuan Province to southmost Ca Mau Province as well as the south area and middle of the East Sea, including the Hoang Sa archipelago, will see winds of level 7 and 8, big waves and rough sea.

By P.V – Translated by Kim Khanh