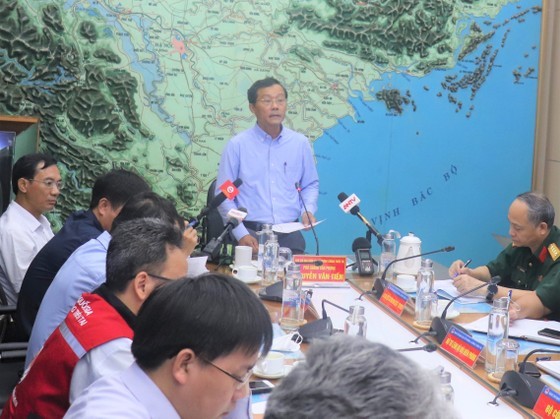 The National Steering Committee for Natural Disaster Prevention and Control on August 10 organizes a meeting to discuss measures coping with the storm. (Photo: SGGP)
According to the National Centre for Hydrology Meteorology Forecasting (NCHMF), as of 7am on August 10, the storm was located 480km east-southeast of Quang Ninh province’s Mong Cai city. The wind speed near the storm centre was 62-88km per hour.
It is forecast to move in west-northwesterly direction at a speed of 15-20km per hour in the next 24 hours.
At 7am on August 11, Mulan would be just 70km south of Mong Cai city (Quang Ninh) and 110km east of Hai Phong.
Under the influence of the storm, the northern part of the East Sea, including the Hoang Sa (Paracel) Islands, will experience strong wind with 4-to-6-metre high waves and rough sea.
The northern part of the Gulf of Tonkin, including the island districts of Co To and Bach Long Vi, will likely see strong wind at 62-74km per hour near the storm centre and 2-to-4-metre high waves from June 10 evening. Coastal localities are also urged to watch out for high tides.
From August 10 afternoon to August 11, the northern region and the north central provinces of Thanh Hoa and Nghe An should expect heavy rain between 100-200 mm, with certain areas recording rain levels up to 250 mm.
From 7am August 11 to 11am August 12, Mulan is expected to move west-northwest, with a speed of 15km per hour. It will weaken into a tropical depression over the northern region of Vietnam.