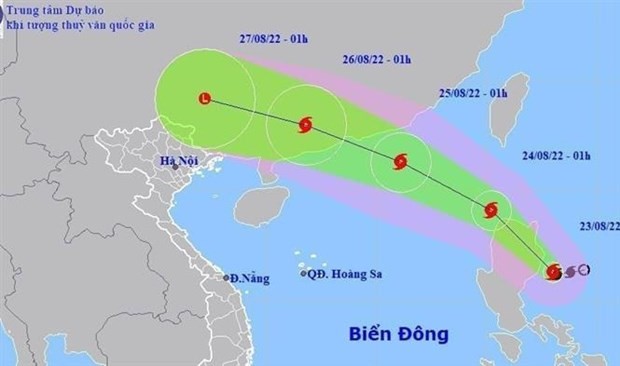 The predicted path of storm Ma-on
This afternoon, the storm slammed the northern part of Luzon Island, the Philippines with a wind force of level 10-12.
Although Ma-on has not yet entered the East Sea, its circulation has affected the easterly territorial water of the northern and middle of the East Sea causing rains and blustery winds of levels 6-9.

Currently, the tropical storm is moving west north-westward with a speed of 15 to 20 kilometers an hour.

It is predicted that the storm will cross the northern part of Luzon Island to enter the northern East Sea and become the third storm of this year’s hurricane season.

At 5 p.m. on August 23, the National Steering Committee for Natural Disaster Prevention and Control released the dispatch to require the coastal provinces and cities from Quang Ninh to Phu Yen proactively implement measures dealing with the storm.