>>Storm Etau mades landfall in Central Vietnam on November 10
As of the last night, gale force winds, rough sea and big waves were seen in area of Dong Hoa Town, Phu Yen Province. Many households in the region have seen power outage.

The Phu Yen Power Company reported that there have been 45 out of 110 communes, wards and towns in Phu Yen without electricity.

According to the Phu Yen Provincial Steering Committee for Natural Disaster Prevention and Control, Search and Rescue, the tropical storm triggered torrential rainfall of up to 230 mm in the storm- battered provinces through overnight. 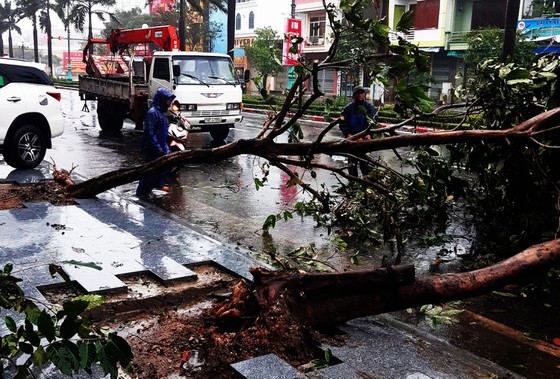 As of this morning, many hydropower plants and reservoirs in the Central region started water release to minimize risk of flooding in downstream areas.
At around 8AM today, floodwater started to rise at riverbanks and streams, causing flooding in many low-lying localities.

Meantime, the Binh Dinh Provincial Steering Committee for Natural Disaster Prevention and Control, Search and Rescue warned of extreme rainfall and risks of flash flood, landslide and flooding in districts of An Lao, Hoai An, Phu My, Vinh Thanh, Tay Son, Van Canh and Hoai Nhon Town.
The People’s Committee of Binh Thuan Province has decided to temporarily suspend high-speed boats on Phan Thiet - Phu Quy route from 9PM on November 9 to 12AM on the next day in order to proactively deal with storm Etau.

Passengers boarding a high speed boat on Phan Thiet-Phu Quy route
Relevant agencies in the province also coordinated with districts, towns and coastal cities to count the number of sea-going fishing vessels, instruct them to quickly move to shelters and keep in touch with ship owners.