It is predicted that the cold spell would be likely to spread to the Mid-Central and South- Central regions with average temperature between 13 and 16 degrees Celsius as from today. Meanwhile, the lowest temperatures in the northwestern provinces dropped to 6- 9 degrees Celsius, even down to below zero degree Celsius in higher areas.

As from December 31, the Southern region’s weather will become cooler at nighttime and in the early mornings. 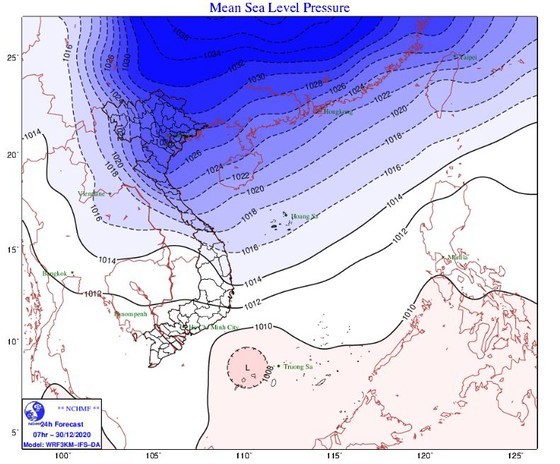 Cold waves are spreading gradually to Vietnam.
According to former Deputy Director of the General Department of Meteorology and Hydrology Mr. Le Thanh Hai, the atmospheric pressure results from Siberian high-and-cold pressure center showed that the cold-level pressures have just crushed a record in history so far, normally spreading to East Asia, Southeast Asia and South Asia. As this reason, there will be extra frigid wave to dump the country in January 2021.

By Van Phuc–Translated by Huyen Huong