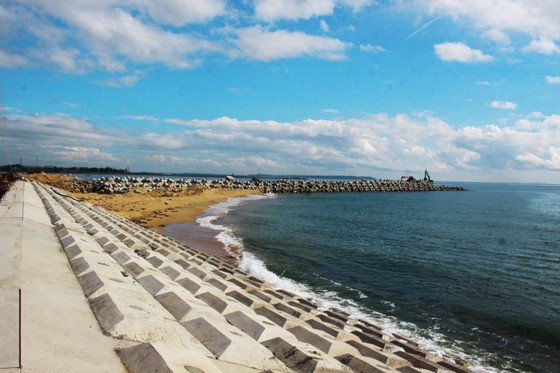 Previously, in the last three months of 2021, a serious landslide swallowing around 750 meters in length directly threatened the lives and property of people in Pho Truong Village.
In order to overcome urgently landside development, ensure the safety of lives and properties of people as well as infrastructure works, soon stabilize people's life, the People’s Committee of Quang Ngai Province approved the construction and investment project of anti-erosion coastal embankment in Pho Truong Village in April of 2022 and assigned the provincial Traffic Construction Investment Project Management Board as the project’s contractor.

The 700-meter-long embankment system is designed with a sloping surface and vertical concrete walls with a total investment of VND85 billion (US$3.6 million).

It is expected that the entire project will be completed by September 30 in advance of this year’s hurricane season.