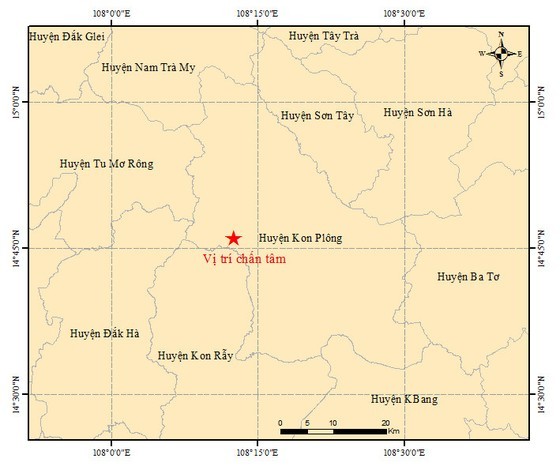 The epicenter of the earthquake is located in Kon Plong District of Kon Tum Province.
Specifically, at 2:10 p.m. on Tuesday, many residents felt shaking within five to seven seconds and many people saw burst door locks of the offices after the earthquake.
Apart from Nam Tra My District, the city of Tam Ky, Tien Phuoc District, Dien Ban Town, Quang Nam Province also recorded the tremors caused by the earthquake.

According to the Institute of Geophysics, the epicenter of the earthquake was located in Kon Plong District of Kon Tum Province, which is contiguous with Nam Tra My District of Quang Nam Province at 2:8 p.m. on the same day with a magnitude of 4.7 on the Richter scale and its epicenter of around 8.2- kilometer deep underground.