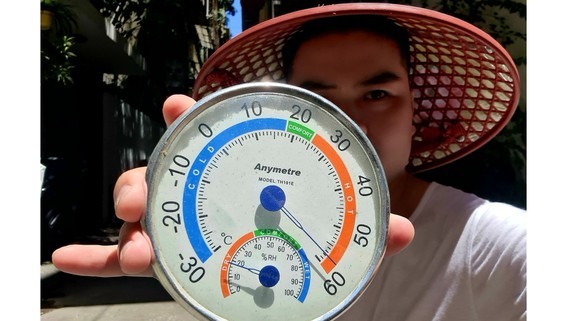 The National Hydrology Meteorology Forecast Center forecasts that this extreme weather will last until June 22. During this time, the ultraviolet level in many provinces and cities is severely high.

Many street vendors in Hanoi reported they have had to go out earlier than usual to sell their merchant in order to avoid such an unbearable heat these days. When on street, they must wear several layers to protect their skin and prepare towels to continuously swipe sweat pouring down from their face and neck.

Most residents in Hanoi evade this heat by staying indoors during midday.

Doctors warn that long-term heat waves are an ideal condition for the bloom of many harmful bacteria, viruses, insects. The most vulnerable subjects in this harsh weather are children and the senior.

Vietnam Electricity Corp. (EVN) and the National Load Dispatch Centre (NLDC) reported a record high of 41.709MW in electricity consumption on June 18. Because of this scorching temperature, which lasts until August, EVN requests that citizens be smarter in using their electrical equipment to ensure safety and energy saving, especially in peak hours.