However, it is hard to relocate people from high- risk areas so-called the red zones following the Directive No.16 of the Prime Minister.

At a conference between the Central Steering Committee for Natural Disaster Prevention and Control and relevant agencies, localities on September 9, General Director of General Department for Natural Disaster Prevention and Control Tran Quang Hoai dispatched an official letter to propose the Ministry of Health to soon issue urgent evacuation instructions for people in Covid-19 hit areas.
On the same day, the Ministry of Health issued a guidance of rapid Covid-19 test to detect and remove coronavirus infections to seperate places. That aims to ensure safe distance from other people in evacuated areas. 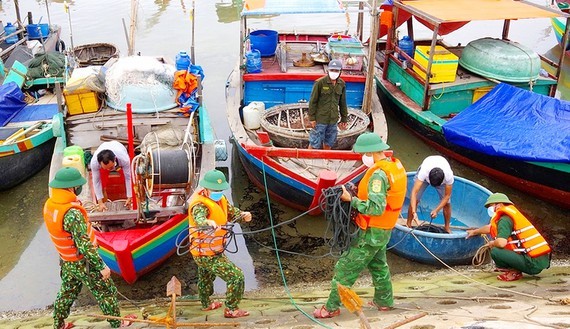 The functional forces prepare for evacuation plan as tropical storm Conson could bear down on the mainland.
According to Vice Director of the National Center for Hydrology Meteorology Forecasting Hoang Phuc Lam, Conson officially became the fifth tropical storm of the 2021 hurricane season after entering the East Sea. Yesterday afternoon, its eye was about 450 kilometers far from the Paracel Islands.
On the same day, storm-prone localities urgently asked all vessels to seek shelters and farmers to promptly harvest their crops to minimize damage as the storm is going to bear down.

It is difficult to map a path of storm Conson as it is interacting with newly-formed Chanthu in the east of the Philippines.

On September 11, 12, the tropical storm is forecast to mainly churn in the Paracel Islands with a maximum wind of up to level 13, and then it will tend to slowly head to the mainland of Vietnam.

By 5 p.m. on September 9, 351 vessels with 2,912 people aboard from Quang Nam, Da Nang, Quang Ngai and Binh Dinh provinces and cities were still in dangerous waters where the storm will be likely to pass through.