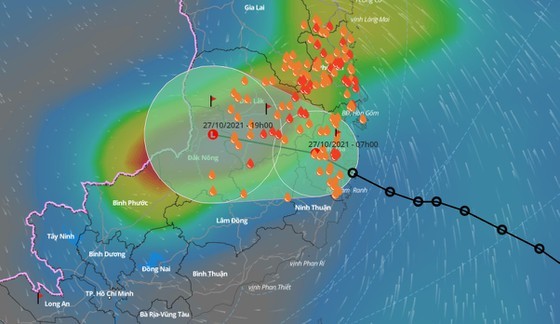 A tropical depression this morning weakens into a low-pressure zone.

The system was around 12.1 degrees north latitude, 109.3 degrees east longitude on the coast of Khanh Hoa Province with a maximum wind of 50 kilometers per hour.
From yesterday morning through early Wednesday morning, the tropical low-pressure system triggered intense rainfalls between 80 mm to over 200 mm along with gusty wind of level 7 in the South-Central and Central Highlands regions.

Throughout Wednesday, the entire provinces from Thua Thien-Hue to Ninh Thuan and the South Central region continue to face heavy rainfalls between 50 mm and over 150 mm. From tonight, the rainfall may be expected to reduce gradually in the South- Central and Central Highlands.

The North-Central, Mid-Central and the eastern part of the Northern region will suffer from medium-heavy rains under the impact of cold air and disturbance of eastern wind from tonight to the end of this month.


By Quoc Viet-Translated by Huyen Huong