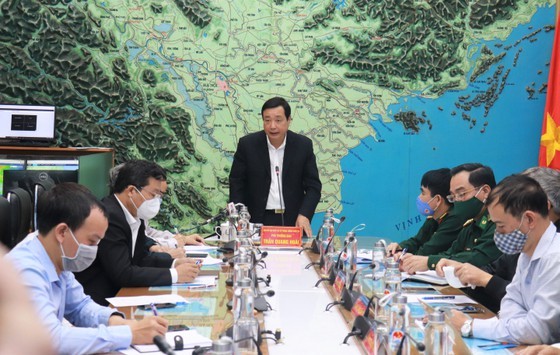 A view of the online conference this morning
As of 1 a.m. today, the eye of the tropical depression was about 140 kilometers far southeast from the Southwest Cay Island with gusty winds of 40-50 kilometers an hour.
In the next 24-48 hours, the system will move west-northwest, develop into a storm with a maximum speed of 15 kilometers per hour and bear down the provinces from Binh Dinh to Binh Thuan before turning into a tropical depression and a low-pressure zone respectively.

The path of the tropical depression
According to the Directorate of Fisheries under the Ministry of Agriculture and Rural Development, around 194 vessels are working in dangerous areas.
The provinces from Quang Binh to Ba Ria- Vung Tau need to keep close to the development of tropical depression as there are many aquaculture farms near shore in the localities.

Colonel Nguyen Dinh Hung, Deputy Head of the Border Guard High Command's Search and Rescue Office informed that nearly 50,000 vessels along with over 261,000 workers were provided instructions of path and position of the tropical low-pressure system to help them proactively avoid disasters ahead.

At the conference, the relevant agencies continued to provide warnings of intense rains in the provinces from Thua Thien- Hue to Khanh Hoa; and downpours, cyclones, lightning and hail in Ninh Thuan, Binh Thuan, the Central Highlands and Southern regions, especially information related to landslide situation at traffic roads and the national highways to soon resume the operation of the roadways and railways.

Deputy Head of the National Steering Committee for Natural Disaster Prevention and Control Tran Quang Hoai suggested the localities continue to fire smoke signal flares into the sky to warn ships in the danger zone, overcome the consequences of floods and landslides on traffic routes.

Downpours intensify and the forthcoming storm will increase the risk of landslides, floods and flooding so the localities should concentrate on ensuring safety for people living in flood-hit areas.

Currently, irrigation reservoirs and hydropower plants are full of water, except for large-scale ones. Meanwhile, prolonged downpours and flooding are expected to continue in the next several days. Hence, the localities need to carefully make a plan of resident evacuation from the flooding-prone areas.

By staff writers-Translated by Huyen Huong