In his dispatch to local administrations and related competent agencies, Vietnamese Prime Minister directed to take proactive solutions to cope with flood which has been aggravating the central region.
Torrential downpours hit many parts in the central from October 6 till now. Some provinces have recorded rainfall of between 300mm to 500 mm a day; worse, Quang Tri Province and Thua Thien – Hue Province have measured rainfall from 700 to 900mm; therefore, these places were inundated and separated.

Weather forecasters said the torrential rains will continue to hit the region with river water level from Quang Binh to Quang Ngai will rise to dangerous line even exceeding the third-state warning level.
Erosion and inundation will possibly occur in low-lying districts especially in districts Huong Hoa , Dak Rong, Hai Lang, Trieu Phong in Quang Tri Province, Dai Loc, Duy Xuyen in Quang Nam, Phong Dien in Thua Thien – Hue and Minh Hoa in Quang Binh Province.
The PM requested people’s committees in cities and provinces from Ha Tinh to Phu Yen and the central highlands region to keep an eye on development of flood and downpours to have timely emergency assistance for residents' safety and minimize loss to the lowest.
Last but not least, evacuation is needed in deeply submerged areas. Coerced evacuation must be conducted in case that people refuse to move. Maintenance and rescue work must be carried out to find missing people and local authorities should pay visits to family members of dead people. Evacuated people must be provided with food, clothes and safe shelters.
Local administrators must issue warning to residents to guide them in travelling as well as send police officers to closed paths due to cascading soil and rocks.
Related competent and local administrators must monitor operation of hydroelectric dams in the provinces as per the regulations and handle arising problems. Ministries of Agriculture and Rural development, Industry and Trade, Vietnam’s state-run utility EVN were assigned to closely manage the operation of irrigation dams and hydroelectric dams as well as send its updates to the Central Steering Board for Natural Disaster Prevention and the Commanding Committee of Natural Disaster Prevention and Control, Search and Rescue in localities in case that serious flood occurs.
The Ministry of Education and Training must implement work to ensure teachers and students’ safety as well as protect facilities and learning items.
The People’s Committee of the Central Province of Quang Nam said that due to torrential rains in these days, mountainous districts were submerged; landslide occurred and flash floods were highly possible; therefore, many households in the region were evacuated to safer shelters. Flood evacuees of 13 households in Tay Giang District , 6 other households in Avuong Commune, households in Axan Commune and villages Ta vang in Atieng Commune have transported their property to higher places and prepared proactive safety measures.
Traffic on the roads such as Ho Chi Minh City and DH1 had slowed to a crawl due to continued erosion. Chairman of Tay Giang District People’s Committee Bhling Mia said that local administrators have taken turns to guard at erosion roads relentlessly from October 7 to clear landslide debris as well as issue warning to travelers.
Several homes Nam Tra My District saw their loved houses swallowed by water, rescue men took people to safer places.
Quang Tri authorities allowed students to stay at home as rainstorms caused rivers to swell to dangerous levels and many places were submerged in the province. Five people were reported to be dead and missing so far.
The floodwater inundated many houses in Huong Hoa District under 1 meter – 1.5 meter water; therefore, the local authority evacuated over 5,248 residents in seven communes from low-lying districts and nearby Se Pon river to safer places. 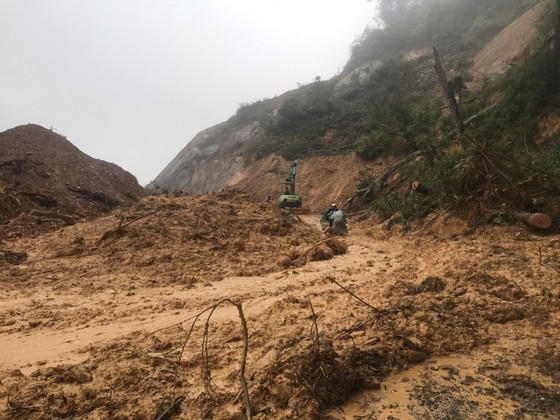 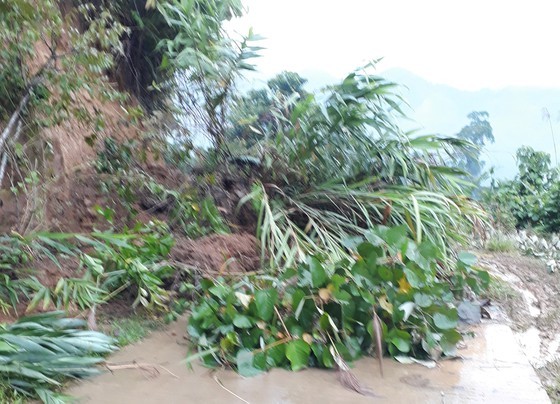 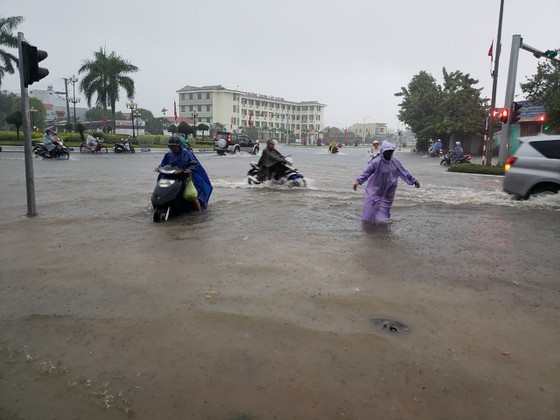 Some roads are submerged in Hoi An Town in Quang Nam Province (Photo: SGGP) 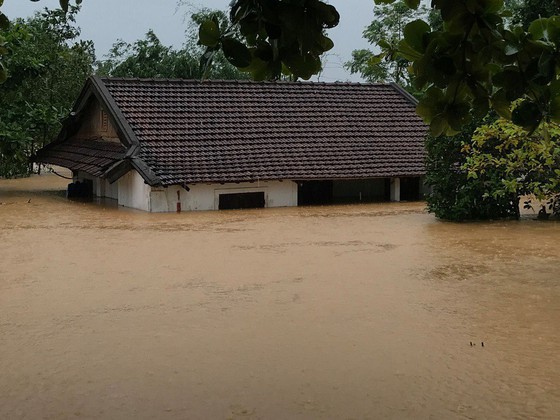 A house is inundated (Photo: SGGP) 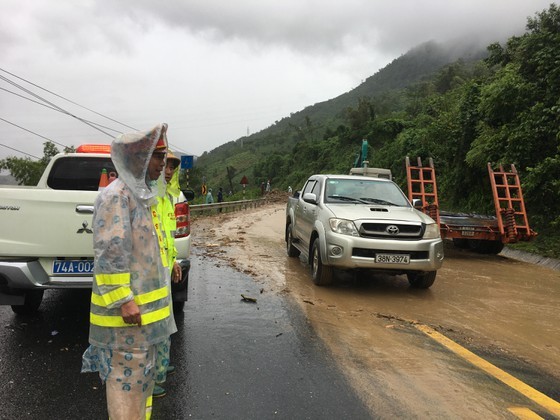 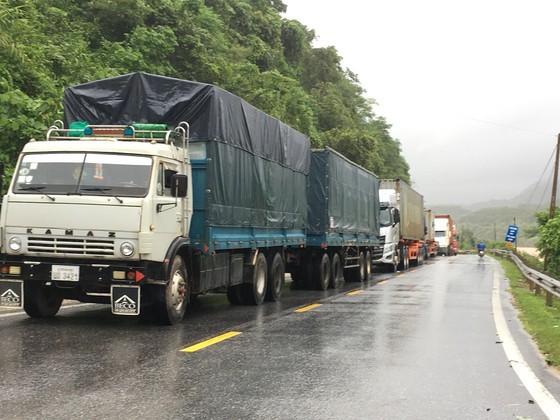 Trucks are lined because traffic slows to a crawl (Photo: SGGP) 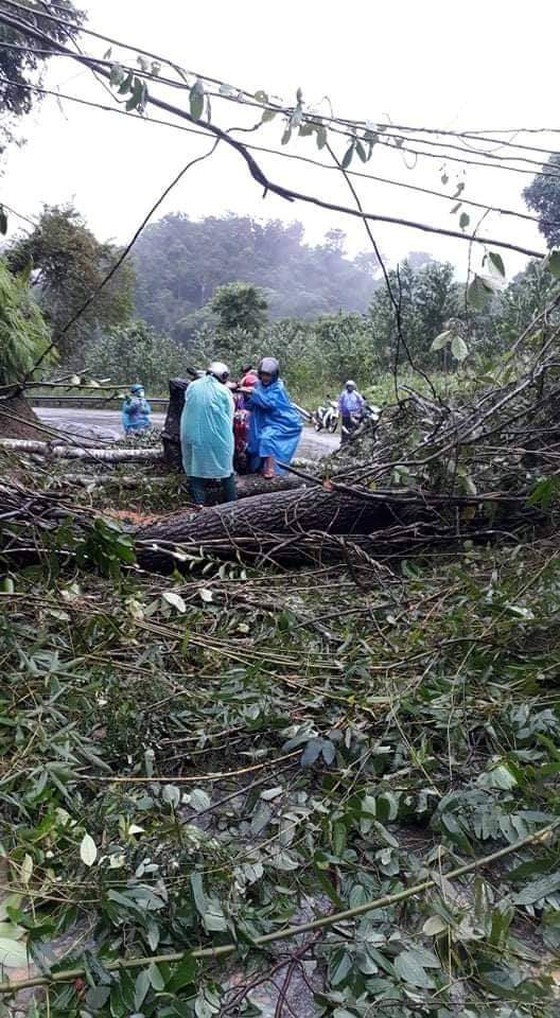 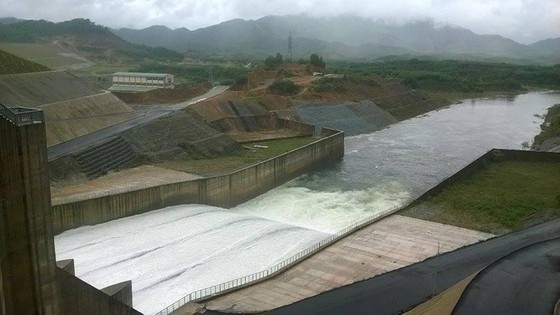 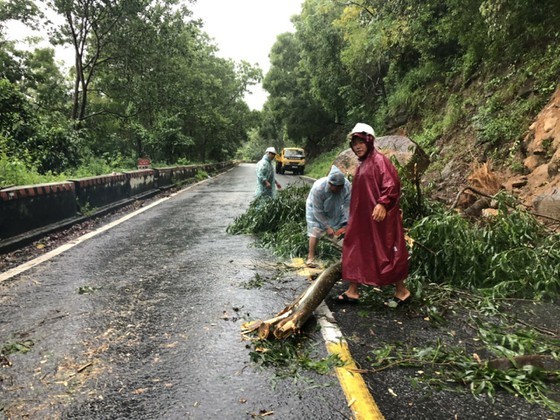