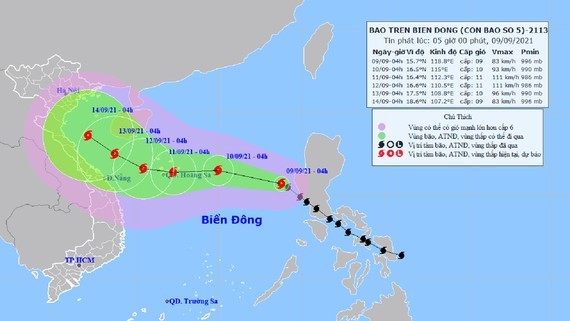 The path of Conson is caught from the National Center for Hydrology Meteorology Forecasting.
The dangerous system is forecast to keep west-northwestward at a maximum speed of 20 kilometers an hour in the next 24 hours.
By 4 a.m. tomorrow, its eye will be at about 350 kilometers far from the east of the Paracel Islands with blustery winds of 90-100 kilometers per hour.

All vessels working at the dangerous areas are set to brace for impacts of wind surge, big waves and cyclones.

Conson is likely to keep its speed of 10 to 15 kilometers per hour, turn into the west and tends to intensify rapidly hours later.

By 4 a.m. on September 12, the tropical storm will be at about 150 kilometers of the west of the Paracel Islands with the peak wind of 120 kilometers an hour near the center of the storm.