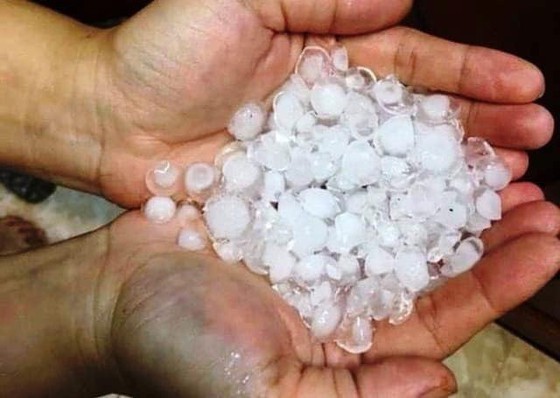 The displacement of the southern edge of continental high pressure system and compressed thunderstorm cloud moving from the Northwestern region to the Red River Delta triggered long- lasting downpours in midlands and mountainous areas of the North on the large scale.

The development of thunderstorm clouds caused an appearance of hailstorm phenomenon in some places of Si Ma Cai District and Tan An, Tan Thuong communes of Bao Ha District in Lai Chau Province.
Many house's roofs was punctured during the hailstorm.

Big hails damage house's roofs
From the beginning of the year, the hailstorm phenomenon has occured three times.

Both the Northern and North- Central regions experienced showers and thunderstorms.

Today, it is expected that the cold air would continue to spread the Northeast, Northwest and North- Central regions.

Due to the influence of cold air in combination with the upper winds convergence, the Northern province and Thanh Hoa maintain showers and thunderstorms, notably medium- heavy to heavy rains, lighting, hails and powerful winds in the Northern mountainous region.