Other localities are also ready for evacuating over 1,000 residents from high-risk areas of flash floods and landslides.
The National Center for Hydrology Meteorology Forecasting (NCHMF) informed that the Central provinces of Thua Thien- Hue, Quang Nam, Quang Ngai and Binh Dinh had experienced average rainfalls between 100 mm and 200 mm.

From now to November 14, heavy rainfalls between 200 mm and over 800 mm are warned for the provinces from Thua Thien-Hue to Khanh Hoa, from Quang Nam to Phu Yen.

Deputy Director of the National Center for Hydrology Meteorology Forecasting Hoang Phuc Lam said that ongoing cold air front along with upper-air turbulence resulted in intense rains within two to five hours across the Mid-Central and South-Central regions. 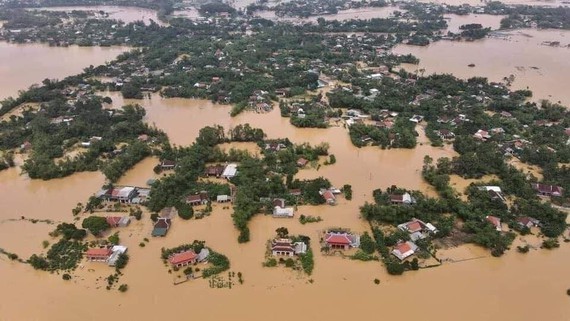 The Central localities are facing serious flooding.
At a conference between the National Steering Committee for Natural Disaster Prevention and Control and members of its sub-division on implementing preparedness for new flood waves in the Central region, Director General of the Ministry of Agriculture and Rural Development's General Department of Disaster Prevention and Control cum Deputy Chairman of National Steering Committee for Natural Disaster Prevention and Control Tran Quang Hoai suggested the above-mentioned localities build scenarios against the current extreme rainfalls, ensure food supplies within a month for flood-hit areas.
Throughout Tuesday, serious flooding and talus landslides caused traffic disruption on many national highways in Quang Nam Province.

The rivers in districts of Bac Tra My, Tay Giang and Nong Son crested at 0.5 to 1 meter, causing flooding, talus landslides and landslide points at inter-communal and inter-village roads and traffic congestion.

According to the latest updated news from NCHMF, heavy rains prolonged in the Central provinces from Thua Thien- Hue to Ninh Thuan, Lam Dong, Gia Lai and Dak Lak for the past six hours.

In the next six hours, it is forecast to torrential rains along with the risks of landslides, flooding and flash floods in the above-mentioned localities.