A ceremony to receive the UNESCO certificate of recognition of Xoe Thai art as an Intangible Cultural Heritage of Humanity was held on September 24 in Nghia Lo Town, Yen Bai Province.

Prime Minister Pham Minh Chinh, speaking on behalf of leaders of the Party and State, congratulated the authorities and people of ethnic groups in Yen Bai, Son La, Lai Chau, and Dien Bien on the recognition of Xoe Thai art as an Intangible Cultural Heritage of Humanity during his remarks at the celebrations. 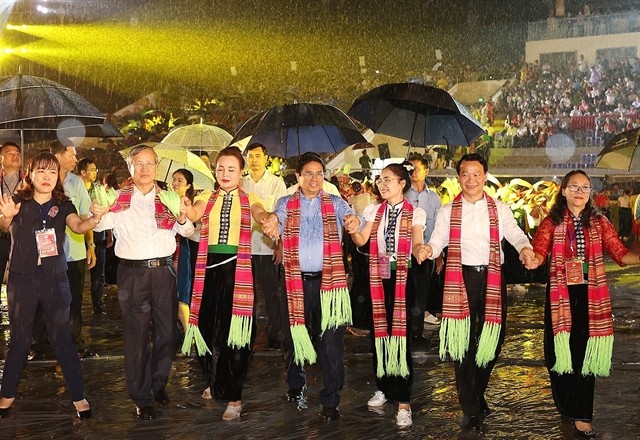 Prime Minister Pham Minh Chinh and delegates join in the Xoe Thai dance at the ceremony.

The Prime Minister has expressed his belief that the recognition of Xoe Thai as Vietnam's 14th heritage inscribed by UNESCO is a moment of great pride for the Thai people and the community of the country's 54 ethnic groups.

PM Chinh praised generations of folk artists and the Thai ethnic community for their tremendous efforts to conserve this priceless cultural heritage.

He also thanked and praised the efforts of the Ministry of Culture, Sports, and Tourism, the National Council for Cultural Legacy, other relevant ministries, agencies, and localities, collectors, and researchers to preserve and promote Xoe Thai art and Vietnam's cultural heritage.

The Prime Minister expressed his hope that UNESCO's Representative Office and Christian Manhart, UNESCO's Chief Representative, would continue to provide Vietnam with close cooperation and effective help to ensure that the country's cultural values are widely disseminated and in tune with the cultural quintessence of humanity.

To continue to create new vitality, spread, and strongly inspire the value of Xoe Thai art, the Prime Minister suggested that the authority, people, and Thai community in the Northwest provinces, as well as the Ministry of Culture, Sports, and Tourism, work cooperatively to effectively implement the "National Action Programme to protect and promote the value of the intangible cultural heritage of Xoe Thai art" in accordance with the commitment to UNESCO.

"Let us do it with enthusiasm, with heart, with pride, with inner strength, so that the lyrics and music of Xoe khan, Xoe non, Xoe quat, Xoe sap, Xoe gay, Xoe hoa, Xoe dancing using various props such as scarves, hats]... continue to be nurtured, developed, and spread throughout the community of ethnic groups," he said.

According to PM Chinh, the noble and beautiful value of Xoe Thai art should be protected and promoted internationally as well as domestically. Therefore, it is vital to recognise that this is the representative intangible cultural legacy of humanity and take appropriate action.

The Prime Minister suggested expanding studies and coming up with concrete plans to protect and enhance ethnic groups' and Xoe Thai's identity and customs in socio-economic growth and tourism development.

He urged everyone to take steps to improve the lives of skilled artisans who are committed to preserving the heritage while also making it easier for people to experience and perform Xoe Thai in light of the country's new development conditions.

At the ceremony, Pauline Tamesis, United Nations Resident Coordinator in Vietnam, presented the UNESCO certificate recognising Xoe Thai art as an Intangible Cultural Heritage of Humanity to the representative of the Ministry of Culture, Sports, and Tourism, as well as leaders of the People's Committees of the provinces of Yen Bai, Son La, Lai Chau, and Dien Bien.

Tamesis offered congratulations for this significant event and wished that the Thai community and Vietnamese people would continue to maintain, promote, and disseminate the significance of Xoe Thai art, while also contributing more to UNESCO's activities and human culture. 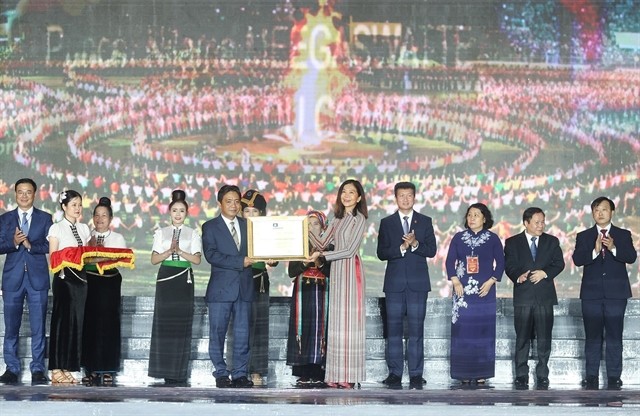 Following the UNESCO certification ceremony, attendees were able to enter the art space and experience the local distinctive culture through an art programme centred on the theme "Xoe Thai - Essence of the heritage region."

The program ended with the performance "The quintessence of Xoe art," which brought together traditional folklore values that have become the heritage of the Thai people in the Northwest, with the involvement of more than 2,000 artisans and performers.