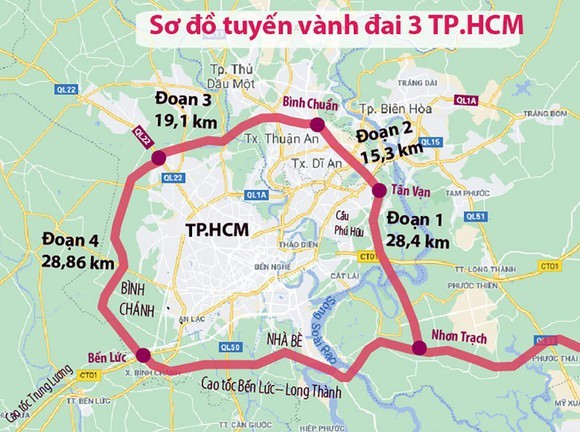 Map of Ring Roads No.3 and No.4 in HCMC
Members of the working team include the Ho Chi Minh City People’s Committee as Head of the working team along with leaders of ministries and agencies such as Deputy Minister of Planning and Investment Tran Quoc Phuong, Deputy Minister of Transport Le Dinh Tho, Deputy Minister of Finance Ta Anh Tuan, Deputy Minister of Justice Phan Chi Hieu, Deputy Minister of Construction Bui Hong Minh, Deputy Minister of Natural Resources and Environment Le Minh Ngan, Deputy Governor of the State Bank of Vietnam (SBV) Dao Minh Tu, Deputy Chief of the Government Office Nguyen Cao Luc, the Chairmen of the Provincial People’s Committee of Dong Nai, Binh Duong, Long An, Ba Ria-Vung Tau and relevant agencies.
The working team’s mission is to build plans of detailed implementation to ensure the progress of submitting the projects to the National Assembly at the meeting in May; strictly review the compensation, site clearance, resettlement ensuring cost saving, effectiveness, feasibility, compliance with the law, avoidance of waste and corruption; review the unit price; check investment direction and scale, including the reduction of intersections to suit the nature of urban expressways and avoid waste; study and propose the suitable and feasible capital sources between central and local authorities and feasible mechanisms and policies to implement the project as soon as possible.

The Ring Roads No.3 and No. 4 in Ho Chi Minh City play an important role in connecting the provinces and cities in the southern key economic region and in processing a new development space. Right from the new Government term, the Prime Minister has focused on directing the study of the investment plans of the projects. Still, the investment in the public-private partnership (PPP) form has faced many difficulties and impracticalities, especially to the Ring Road Project No.3 as the project will travel through urban areas with high total investment, the costs of compensation, site clearance and resettlement.

The Prime Minister assigned the Ho Chi Minh City People's Committee to prepare for investment of the Ring Road No.3. The committee is responsible for building and submitting the pre-feasibility study report, organizing seminars and advising relevant agencies to report the project to the Government, the National Assembly for consideration and decision on investment policy.
The Municipal People’s Committee has been directed to soon complete the draft of the project’s pre-feasibility study report in early February to ensure the progress and quality to submit them to the National Assembly in May.

The above-mentioned contents were the conclusion of Vietnamese Prime Minister Pham Minh Chinh at a meeting at the Government Office yesterday.