The My Thuan 2 Bridge will start from An Thai Trung intersection in Cai Be District of Tien Giang Province and end at an intersection with National Highway 80, the starting point of My Thuan-Can Tho Expressway.

The bridge and two lanes leading to the bridge will have a total length of 6.61 kilometers including 4.7 kilometers lanes with the designed speed limit of 100 kilometers per hour.

Deputy Minister of Transport Nguyen Nhat makes a statement at the ceremony organized on February 27 to start work on My Thuan 2 Bridge (Photo: SGGP)
At first the bridge with a length of 1.9 kilometers was designed to have four lanes but it was adjusted to six lanes later. It is located 350 meters upstream of the existing My Thuan Bridge.
The bridge requires an estimated VND5 trillion (US$215,369,908), sourced from the State budget, said Deputy Transport Minister Nguyen Nhat. It connects the My Thuan – Can Tho and Trung Luong-My Thuan expressways to form a good traffic system to help push up logistics in the Mekong Delta region and reduce pressure on existing My Thuan Bridge and the National Highway 1A.
The bridge is expected to be completed in 2023. 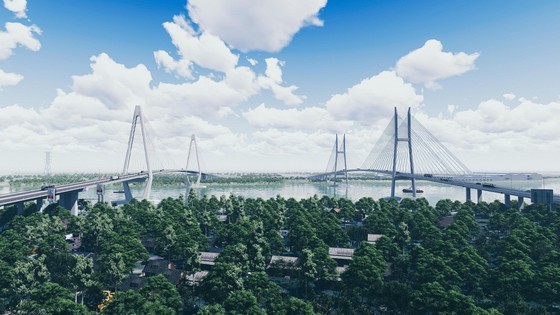 An artist’s impression of My Thuan 2 Bridge