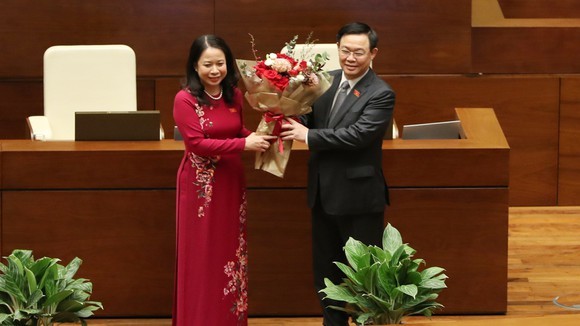 National Assembly Chairman Vuong Dinh Hue (R) congratulates Vo Thi Anh Xuan on her election as Vice State President of Vietnam for the 2016 - 2021 tenure (Photo: SGGP)
Legislators on April 6 afternoon cast secret ballots to elect the new Vice President, part of the ongoing 11th session of the 14th NA.
After that, a resolution on the election was adopted with the support of 447 out of the 449 deputies present at the sitting, equivalent to 93.13 percent of the total parliamentarians. The resolution took effect upon the approval.
Vo Thi Anh Xuan, born on January 8, 1970, was an alternate member of the Party Central Committee in the 11th tenure. She is a member of the Party Central Committee in the 12th and 13 tenures and a deputy of the 14th NA