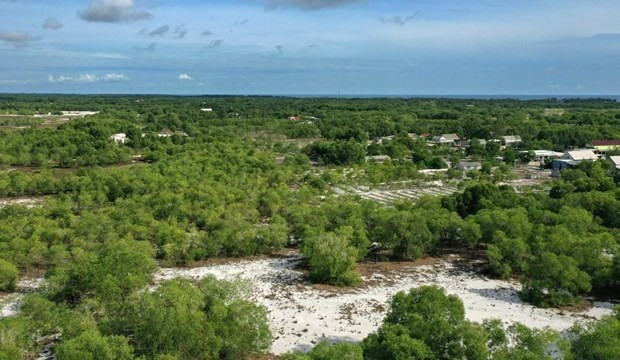 A pine forest on sand in Trieu Phong district of central Quang Tri province (Photo: VNA)
Pham Van Tan, deputy head of the Department of Climate Change under the Ministry of Natural Resources and Environment, made the remarks at a workshop on the outcomes of COP26 held on December 7. The Vietnamese delegation to the conference, taking place in Glasgow, the UK, from October 30 to November 13, was headed by Prime Minister Pham Minh Chinh.

Delivering a report on Vietnam’s implementation of the COP26 outcomes, Tan said the revised 2020 Law on Environmental Protection and a draft decree on mitigating greenhouse gas emissions and protecting the ozone layer have been developed to be fully consistent with the latest regulations just adopted at the conference, serving as the legal foundation to mobilise the entire society's engagement in coping with climate change.
He said however, the biggest challenge facing Vietnam is how to mobilise and maintain the involvement of the entire political system for the mission. A shortage of domestic resources, particularly human resources, also poses problems. 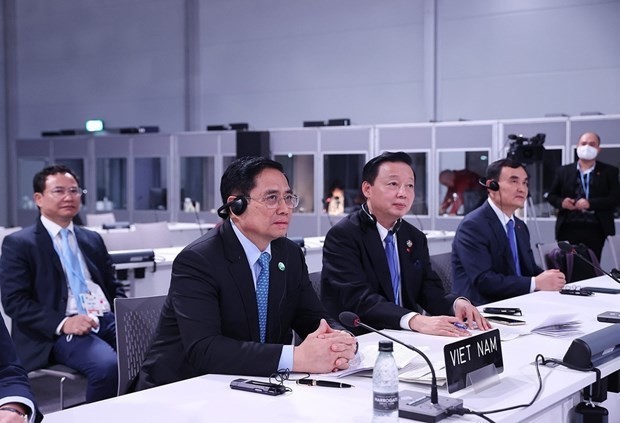 Prime Minister Pham Minh Chinh (front, left) and other Vietnamese officials attend COP26 in Glasgow, the UK, in early November (Photo: VNA)
Giorgio Aliberti, Ambassador of the European Union to Vietnam, recommended Vietnam continue increasing awareness and determination across its public agencies at all levels, localities, organisations and individuals regarding the green transition process.
He proposed that the Vietnamese Government and Prime Minister need to soon issue the decree on mitigating greenhouse gas emissions and protecting the ozone layer; and carbon market development project, among others.
Increasing international cooperation on finance, technology and capacity improvement for the implementation of the nation’s commitments to the Paris Agreement and to COP26 is also necessary, he added.