The two countries have been enjoying dynamic economic cooperation and people-to-people economic exchanges, the PM said, adding that Japan is keen to partner with Vietnam to address defence and security matters, regional issues, and economic development.
PM Abe said he has been a congressman for 25 years and that when he was first elected as a congressman, he and other parliamentarians visited Vietnam and received a warm welcome from the Vietnamese Government. Vietnam’s economy at that time was developing in leaps and bounds thanks to the implementation of reform policies, he said.
The PM continued that he also visited Vietnam in his first term as the Prime Minister in 2006. So far, he has visited Vietnam four times in his capacity as the Japanese Prime Minister, Abe said, adding that he was glad to witness the vibrant development of the Southeast Asian country.
He recalled his visit to Vietnam in November 2017, during which he was invited to Hoi An by Prime Minister Nguyen Xuan Phuc. The two PMs walked around the Vietnamese ancient city and visited the Japanese bridge, as well as a number of shops where Japanese people used to trade in ancient times, through which he better understood the history of exchange between the two countries.
While sharing his expectations on the potential to develop the friendly and cooperative ties between Vietnam and Japan, PM Abe said the bilateral relations must also be mutually supportive and collaborative.
In the eyes of Japanese people, Vietnam is an industrious, smart, and patient nation with warm-hearted people, PM Abe said, noting that the number of people travelling between the two countries has amounted to 1.2 million while there are some 300,000 Vietnamese residing in Japan.
He highly appreciated those Vietnamese people who have become familiar with Japanese language and culture.
The PM hoped more Vietnamese skilled workers would come to work in Japan as its new policy to receive foreign workers takes effect from April 1, 2019.
As Japan is scheduled to host the 2020 Olympic and Paralympic Games in Tokyo, PM Abe said he hopes many Vietnamese sports teams will join the competitions and a large number of Vietnamese will visit Japan to watch the sporting event. 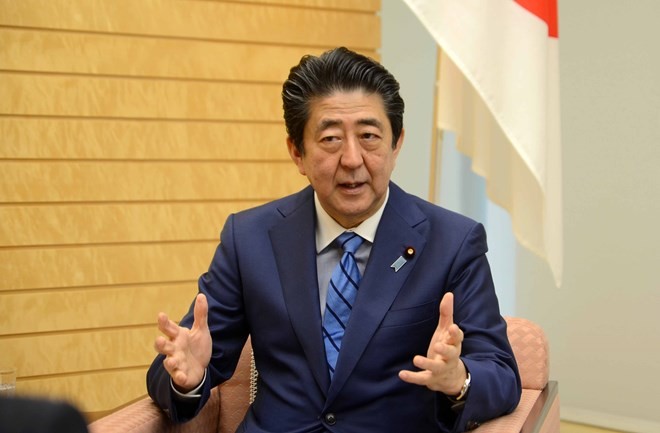 Japanese Prime Minister Shinzo Abe (Photo: VNA)
PM Abe said he had invited Vietnamese Prime Minister Nguyen Xuan Phuc to attend the G20 Summit in Japan. As Vietnam will hold the ASEAN Chairmanship in 2020, the two countries should cooperate to address regional and global issues, he said.
Regarding the Comprehensive and Progressive Agreement for Trans-Pacific Partnership (CPTPP), PM Abe said the birth of the deal was an important and meaningful result to promote free trade, especially as there is increasing global concern over trade protection policies.
This was also the outcome of the close connectivity between Japan and Vietnam, he said, adding that the agreement was very important and progressive for the 21st century because it covers numerous issues such as intellectual property protection, labour mechanisms, the environment, and competition regulations for state-owned enterprises.
Thanks to that, a new economic region will be built based on fairness and freedom, he said, adding that the Asia-Pacific region will become a place to create that economic model.
He hoped that Vietnam would be able to optimise benefits from the deal to further develop its economy and improve the living conditions of its people.
The PM also expressed his belief that the CPTPP will help promote trade and economic exchanges between Vietnam and Japan.
The stable and peaceful Asia-Pacific region will lay a foundation to develop peace and prosperity in Japan and Vietnam, he said. Japan wants to cooperate with all nations, including Vietnam, to jointly create a free and expansive Asia-Pacific region, he said.
The PM also recommended popularising and reinforcing the spirit of respecting law and freedom of navigation and trade, as well as looking toward to the goal of economic development through increasing multinational connectivity in the region, ensuring peace and stability via law enforcement on the seas, and building humanitarian aid and research alongside rescue capacity.