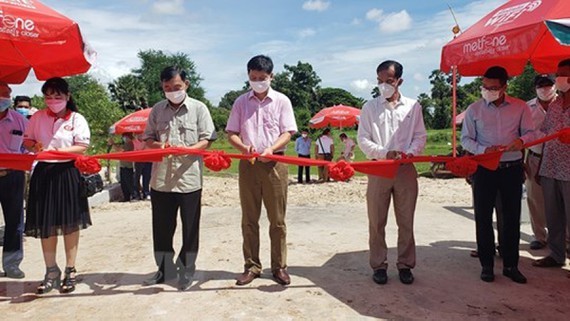 Ribbon is cut to launch the project in Cambodia. (Photo: VNA)

The project comprises of a bridge, embankment and a 50-m road leading to Thao Kong Ta Ang Communal House, a place for cultural and religious gatherings of local people.
The Vietnamese Consulate General in Preah Sihanouk has raised a total of US$18,000 from Vietnamese people, businesses and organisations in Cambodia for the construction of the project which started in early August.

The project will benefit more than 600 local households, many of which are Vietnamese, and help shorten travel time to school for about 200 Cambodian students.

Vice governor of Kampot city Men Vannara highlighted the significance of the project, saying it will enable students to safely travel to school, particularly during the rainy season.

He thanked the government of Vietnam, the Khmer-Vietnam Association and Vietnamese missions in Cambodia for their contribution to the project.

Vietnamese Consul General to Preah Sihanouk Vu Ngoc Ly, for his part, said the project demonstrates the unity and humanity between the peoples at the time of Covid-19. He expected it will help recover the local economy and strengthen relations between Vietnamese expats and local authorities.

The launch of the project was among a series of events to mark the 55th anniversary of the Vietnam-Cambodia diplomatic ties (June 24, 1967 – 2022).