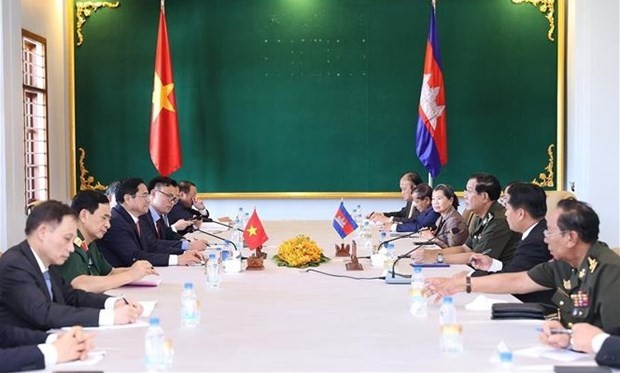 At the meeting between the Prime Ministers (Photo: VNA)

The meeting took place following the celebration of the 45th anniversary of Hun Sen’s journey to overthrow the Pol Pot genocidal regime.
Chinh expressed his hope that Cambodia will reap more achievements in internal and external affairs to gain high middle-income status by 2030 and become a high-income nation by 2050.

Hun Sun described Chinh’s presence at the celebration as a vivid demonstration of the traditional friendship between the two nations, and thanked the Vietnamese army and people for their support to Cambodia during its struggle for national liberation, helping the neghbouring country escape from the genocidal regime.

The PMs noted with pleasure developments in their bilateral ties, saying the two sides have maintained high-level meetings and exchanges, as well as cooperation mechanisms across all spheres, with two-way trade revenue hitting 5.44 billion USD in the first five months of this year, up 19 percent year-on-year.

The number of Vietnamese visitors to Cambodia in the period reached 46,000, making Vietnam one of the top three tourism markets of Cambodia, they said.

The leaders consented to step up high-level delegation exchanges, and effectively organise activities the Vietnam-Cambodia Friendship Year 2022, including the 55th anniversary of bilateral diplomatic ties in Hanoi on June 24.

The two sides will also enhance cooperation in Party, Government and National Assembly channels, along with people-to-people exchanges.

Vietnam and Cambodia will foster connections between their economies in terms of infrastructure, institutions, policies and services, with a master plan for linking their economies by 2030 expected to be completed soon.

The countries will further facilitate cooperation between their businesses, work towards the signing of a border trade agreement, utilise border gates for trade and people-to-people exchanges, increase flights, and promote tourism cooperation.

The two countries will continue their close coordination and mutual support at regional, international and sub-regional forums, especially in 2022 when Cambodia serves as Chair of the Association of Southeast Asian Nations (ASEAN).

Chinh called on the Cambodian Government to create more optimal conditions for people of Vietnamese origin in Cambodia to consolidate their legal status, stabilise their lives, integrate into society, and contribute to Cambodia’s socio-economic development, as well as the relationship between the two countries.