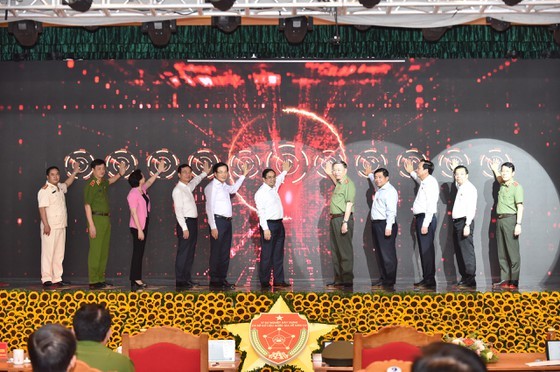 Prime Minister Pham Minh Chinh and other delegates are pressing the button for the launch of the National Population Database and the Citizen ID Card Management System (Photo: SGGP)

Deputy Minister of Public Security Nguyen Duy Ngoc stated in the meeting that ‘National Population Database’ and ‘Producing, Issuing, and Managing Chip-based Citizen ID Card’ are the two largest and most meaningful IT projects for the establishment of an electronic and then a digital government in Vietnam.

Until now, these two projects have been basically finished. The National Population Database has information of over 98 million Vietnamese citizens, and is updated daily from its local counterparts in 63 provinces and municipalities. It is available for connection to other databases of other ministries and localities in order to serve the administration reform process.

The Deputy Minister further informed that the ID number of each citizen is extremely useful in that it can refer to different kinds of personal information, making it more convenient and less time-consuming, money-consuming in administrative procedures. Therefore, his ministry is trying its best to issue chip-based citizen ID cards for all at legal age as soon as possible.

Deputy Minister Ngoc affirmed that with this new ID card, citizens do not need any other documents related to personal information when making transactions with businesses, social organizations, or state agencies. This is supposed to help minimize the use of fake documents and reduce the cost of certifying copies, while actively aiding concerned people to protect their information privacy.

However, the most challenging matter regarding these two systems is the collection and management of information of people who do not have or have not yet identified Vietnamese nationality but have lived in Vietnam for a long time.

Another issue is the swift migration of population from one place to another, leading to difficulties in updating an adjusting information in the National Population Database. Adding to that is the potential danger of illegal access into this critical database.

In his speech, Prime Minister Pham Minh Chinh highly appreciated the effort of related state officers in finishing the two important projects in such a short time, saying that this is a valuable lesson for focused and smartly directed public investment with the consent from all citizens.

He expressed his support the principle of simultaneously developing, reviewing, adjusting, supervising, and auditing the two projects so that any small mistake can be timely corrected and resource waste can be avoided.

The Prime Minister affirmed that the two IT projects are able to transform the traditional population management into more modern one, effectively tackling the lack of consistency in information monitoring among ministries and levels and creating favorable conditions for the launch of online public services.

Furthermore, these systems contribute to the renovation of citizen and state unit management tasks, the crime prevention and control tasks.

Prime Minister Chinh also shared that the newly released strategy to develop an electronic and then a digital government in the period from 2021-2025, with a direction to 2030, identify the databases on population, land use, and businesses are the core ones and must be completed as soon as possible in order to create consistency and close links among state agencies and ministries.

To successfully build them, the Prime Minister mentioned the need of a strong determination of state officials in applying and mastering suitable technologies while encouraging innovation in the process of developing proper digital infrastructure.

He suggested that any tasks proven to be effective and highly supported should be maintained, but those seemingly hard to achieve must be first piloted for necessary adjustments. Resources must be used practically and smartly for both long-term and urgent purposes like Covid-19 prevention.

Finally, Prime Minister Chinh requested that the Ministry of Public Security focus more on the six major missions in the upcoming time, especially the collaboration with other ministries and the localities in tackling current difficulties, inadequacies in terms of institutions, mechanisms, policies, authority and responsibilities during the implementation of those two projects.

By Do Trung – Translated by Vuong Huong