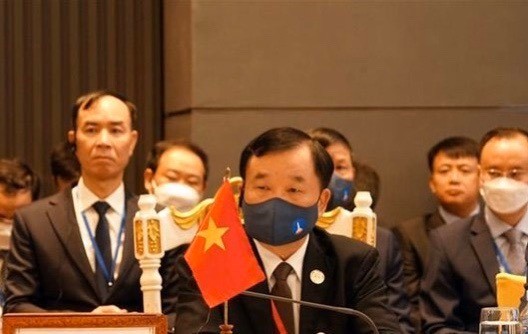 Vietnamese Deputy Defence Minister Sen. Lieut. Gen. Hoang Xuan Chien attends the event. (Photo: VNA)
Vietnamese Deputy Defense Minister Sen. Lieut. Gen. Hoang Xuan Chien made the comment while delivering a speech at the ASEAN Defense Senior Officials’ Meeting Plus (ADSOM ) in Phnom Penh on May 18.
He stressed the need to comply with the Declaration of the Conduct of Parties in the East Sea (DOC) and accelerate the early signing of a practical and effective Code of Conduct in the East Sea (COC).
Vietnam consistently pursues resolving disputes at sea by peaceful means, on the basis of international law, including the 1982 United Nations Convention on the Law of the Sea (UNCLOS), he affirmed.
Besides emerging non-traditional security challenges, there have been new, complicated developments regarding traditional security issues, he said.
Given that context, Chien emphasized that Vietnam has always been steadfast in its external policy of independence, self-reliance, peace, friendship, cooperation, development, multilateralization and diversification of relations.
The head of the Vietnamese delegation expressed his wish for countries to settle conflicts and disagreements by peaceful means, on the basis of respecting international law and the United Nations Charter as well as ASEAN's basic principles.
Since its establishment in 2010 in Hanoi, ADMM has always been identified as an important forum for defense leaders of the 18 member countries to talk about peace, cooperation and mutual development.
Concluding his speech, Chien said Vietnam believes and hopes that conferences within the ASEAN framework, including ADSOM and ADSOM , will help enhance the image and position of ASEAN and make the bloc further develop.
The meeting, chaired by Cambodia, drew top defense officials from ASEAN member countries, and Russia, China, the US, Japan, the Republic of Korea, Australia, New Zealand and India as well as representatives from the ASEAN Secretariat.
In his opening remarks, General Nem Sowat, Director General of the General Department of Policy & Foreign Affairs under the Cambodian Ministry of National Defense, thanked ASEAN countries for their joint commitments and efforts as well as the support of partner countries to promote substantive cooperation within the framework of ADMM and ADMM .
ASEAN Deputy Secretary-General Robert Matheus Michael Tene highlighted the importance of the ADMM cooperation mechanism for enhancing regional defense cooperation.
During the event, delegates heard the outcome of the ADSOM Working Group’s meeting; discussed the regional and world defense-security situation, and considered the ADMM joint statement and preparations for the ADMM meeting scheduled for this November.