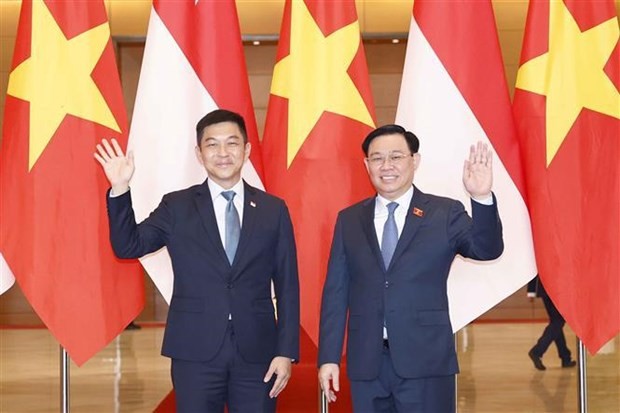 NA Chairman Vuong Dinh Hue (R) and Speaker of the Singaporean Parliament Tan Chuan-Jin in Hanoi on May 18. (Photo: VNA)
Speaker Tan, who is paying an official visit to Vietnam, thanked the country for supporting Singapore in Covid-19 response, noting the two countries’ cooperation and mutual assistance are growing even more strongly.
Chairman Hue congratulated Singapore for successfully containing the pandemic and reopening the economy. He also appreciated its precious provision of Covid-19 vaccine and medical supplies for Vietnam and said he hopes the two sides will continue cooperating in scientific research on Covid-19 and other epidemics, firstly the current unexplained hepatitis in children.
Vietnam attaches great importance to the countries’ strategic partnership and views Singapore as one of its leading partners in ASEAN in terms of both politics and economy, he stressed, asking both sides to coordinate closely to prepare for the 50th founding anniversary of bilateral diplomatic ties and the 10th anniversary of the strategic partnership in 2023.
He noted Singapore is a leading investor in Vietnam, and that the Vietnamese NA and Government always welcome foreign investors, including those from Singapore, and pledge to keep reforming and perfecting policies and laws while helping address obstacles to Singaporean projects in the country.
Suggesting the two sides continue sharing experience in developing a digital economy, a green economy, and renewable energy, Hue expressed his hope for stronger cooperation to connect Vietnamese cities with Singapore to exchange experience in green and sustainable development.
The top legislators held that the signing of a cooperation agreement between the two parliaments this time will help further tighten bilateral links, especially by increasing all-level contacts and discussions in different forms, sharing institutional building experience, maintaining coordination at multilateral forums and organizations, and supporting each other’s stances on regional and international issues of common concern. 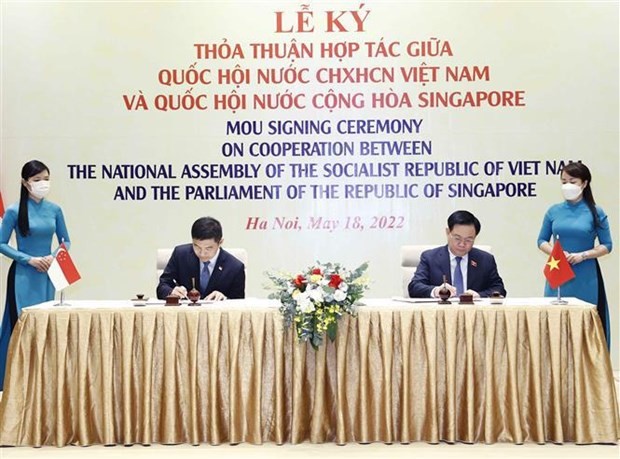 The two parliamentary leaders sign a MOU on cooperation in Hanoi on May 18. (Photo: VNA)
Hue suggested Tan help connect Vietnamese and Singaporean businesses in agriculture, especially hi-tech farming, and promote the city state’s import of high-value products from Vietnam.
He asked both countries to focus on a cooperation model in which products are invented in Singapore and produced in Vietnam; effectively implement cooperation in defense, personnel training, humanitarian aid, disaster relief, and crime fight.
The host leader recommended the two parliaments support the negotiation and signing of a memorandum of understanding on cooperation in cyber security and some other important documents on mutual legal assistance and transnational crime combat.
The Chairman voiced his hope that Singapore will bring into play its role in the region, help with connectivity enhancement and community building in ASEAN, maintain the bloc’s centrality, and coordinate ASEAN’s common stance on regional issues.
He called on his counterpart to continue supporting ASEAN’s common stance on safeguarding peace, stability, security, safety, and freedom of navigation in the East Sea, and peacefully resolving disputes on the basis of international law, including the 1982 UN Convention on the Law of the Sea (UNCLOS).
Hue thanked Singapore for backing Vietnam’s candidacy for membership in the Commission on the Limits of the Continental Shelf for 2023 - 2028, asking it to support Vietnam to run for a seat in the Legal and Technical Commission of the International Seabed Authority for 2023 - 2027.
Agreeing with his host’s proposals, Tan said the two countries boast strong economic ties, and Singaporean firms’ enormous trust in Vietnam remains unchanged and is still increasing.
He shared the view that the countries can work together more closely in boosting digital transformation, green economy, and sustainable development.
Singapore supports its enterprises to seek investment and business opportunities in multiple localities of Vietnam, he noted, adding that the success in economic relations will create not only value in terms of the money flow but also people-to-people connectivity, friendship, and amity between the two countries.
Showing support for his guest’s opinions, Chairman Hue affirmed that their countries still have much room for reinforcing all-round cooperation, in which the collaboration in law and policy making is highly important. The two parliaments have sufficient conditions and need to cement their ties so as to actively and effectively contribute to the Vietnam - Singapore strategic partnership.
Following the talks, the leaders signed a cooperation agreement between the two parliaments.