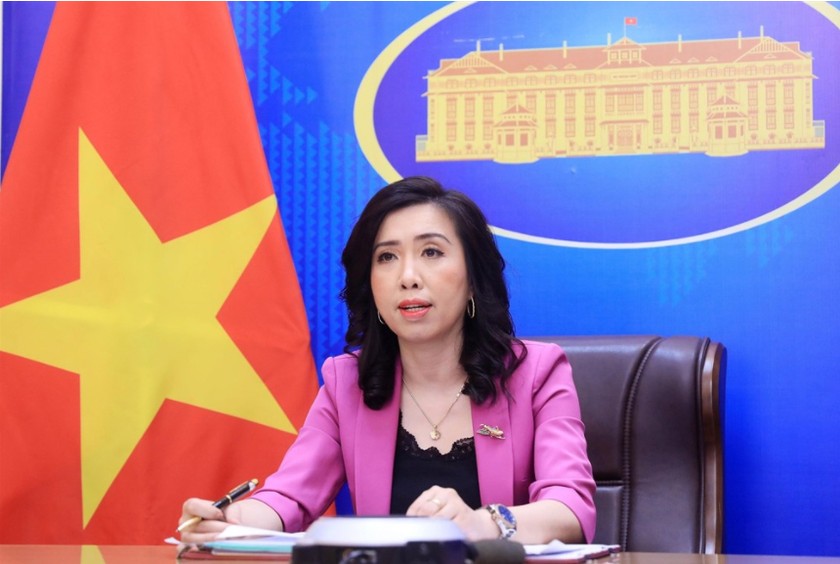 Spokeswoman of the Ministry of Foreign Affairs Le Thi Thu Hang at the press briefing on Thursday. Photo courtesy of the ministry
She made the statement while responding to reporters’ question about China’s sending Y-20 transport aircraft to Vanh Khan (Mischief Reef), Xubi (Subi Reef) and Chu Thap (Fiery Cross Reef) of Vietnam’s Truong Sa archipelago, during a virtual press conference of the ministry held on September 23.
Hang underlined that this activity of China violates Vietnam’s sovereignty over Truong Sa archipelago and international law, runs counter to the Vietnam-China agreement on basic principles guiding the settlement of maritime issues, increases militarisation and goes against the Declaration on the Conduct (DOC) of parties in the East Sea and efforts by stakeholders in negotiations for a Code of Conduct (COC) in the waters.
“Vietnam requests that China respect Vietnam’s sovereignty over Hoang Sa and Truong Sa archipelagos, put an end to and will not repeat similar violations, respect international law and common perceptions by the countries’ leaders on maritime issues, and contribute to the development of the Vietnam-China friendship and comprehensive cooperation in a practical, proactive and responsible manner, thereby maintaining peace, stability and cooperation in the East Sea,” she stated.
Regarding a letter dated from China’s Qing dynasty unveiled by scholar Bill Hayton which noted that Hoang Sa is sea and has no relevance to China’s sovereignty, the spokesperson reiterated that Vietnam has full historical evidence and legal foundations to affirm the country’s sovereignty over Hoang Sa and Truong Sa, which are in line with international law, and the aforementioned document serves as another proof.
Responding to reporters’ queries about Vietnam’s reaction as Freedom House places Vietnam among countries with little internet freedom, Hang said that it is not the first time that the organisation has made biased and prejudiced assessment based on untrue information on Vietnam.
She stated that efforts to promote and ensure human rights in Vietnam have been highly valued by countries and international organisations in the Universal Periodic Review (UPR) under the auspices of the Human Rights Council.
“Therefore, the Freedom House’s report has no value and it is not necessary to comment further,” the spokesperson said.