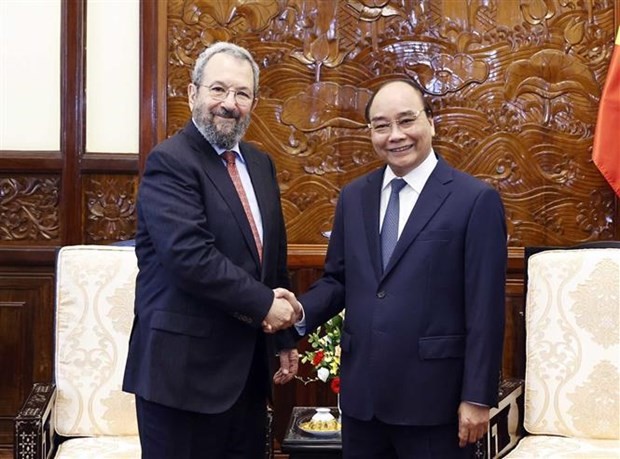 During a reception for former Prime Minister of Israel Ehud Barak in Hanoi on August 17, Phuc said as a partner with friendship and comprehensive partnership, including in national defence-security, Israel has become an important partner of Vietnam.
Vietnam wishes to learn from Israel’s experience in choosing and training talents to build a strong country, he said.
He suggested the two countries regularly maintain high-level visits and offer mutual support at international forums and organisations. With two-way trade of US$1.14 billion in the first half of this year, up 55 percent, the two countries need to further work on this field, he said.
As Vietnam is performing the policy of building a sustainable digital society by 2025, with a vision to 2030, the country wants to learn from Israel’s experience in ensuring security and national sovereignty over cyberspace, he said.
The host wished that with his role and influence, the former Israeli PM would make further contributions to boost bilateral friendship, especially sharing experience in building startup support policies, develop sci-tech and innovation, nurture young talents and connect with experts and businesses in Israel and the world.
As 2023 marks the 30th anniversary of Vietnam – Israel diplomatic ties, the President suggested the Vietnamese authorities work closely with the Israeli Embassy to hold practical activities, contributing to lifting bilateral ties to a greater height.
Barak expressed his delight that the two countries are looking forward the signing of a free trade agreement. He believed that Vietnam will become a developed nation by 2045.
He said Israel pays special attention to education and has incubators to nurture talents for the country. It also built policies to attract Israeli talents from abroad and foreign direct investment.