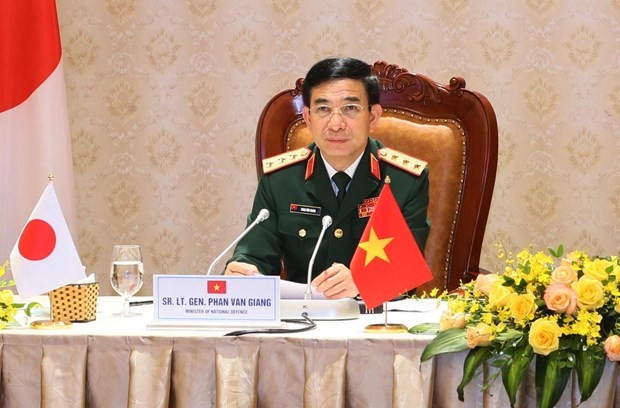 Vietnamese Minister of National Defence Sen. Lt. Gen. Phan Van Giang at the online talks with Japanese Defence Minister Kishi Nobuo on June 3 (Source: VNA)
The two ministers discussed the regional and international situation and informed each other about their respective countries’ efforts to prevent and control COVID-19. They also highly valued Vietnamese and Japanese military medicine experts sharing knowledge and experience in the pandemic response via teleconferences.
They agreed to carry out bilateral and multilateral defence cooperation activities as soon as the COVID-19 pandemic is brought under control, with priority given to all-level meetings and UN peacekeeping operations; effectively maintain the dialogue and consultation mechanisms among the staff of the countries’ naval, infantry, and air forces; organise exchanges among the naval, air, and coast guard forces; and hold capacity improvement programmes.
The officials also emphasised on the need to sign an agreement on the transfer of defence equipment and technology between the Vietnamese and Japanese governments soon. 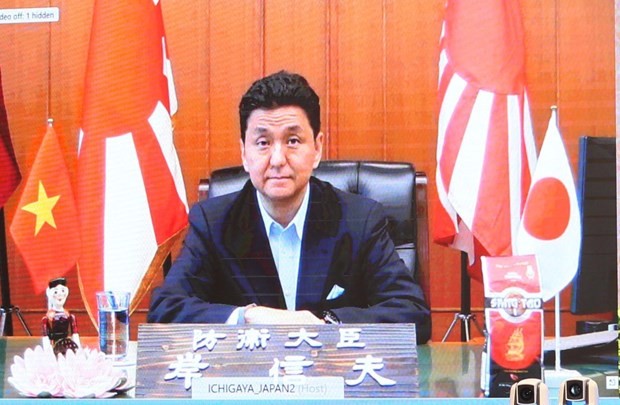 Congratulating Giang on his appointment as Minister of National Defence of Vietnam, Kishi spoke highly of the two countries’ relations as well as Vietnam’s role in ASEAN, expressing his belief that in his new position, Giang will continue making significant contributions so as to lift bilateral ties, including those between the two militaries, to a new height.
Appreciating his counterpart’s positive evaluation of the countries and the militaries’ relations, Giang thanked Japan for assisting and supporting Vietnam to fulfil its role as ASEAN 2020 Chair.
He held that the two sides should coordinate together to well perform the co-chairmanship of the Experts’ Working Group on Peacekeeping Operations within the framework of the ASEAN Defence Ministers’ Meeting Plus in the 2021 - 2023 period.
The Vietnamese minister applauded Japan’ proposal and successful organisation of the online Japan - ASEAN seminar on humanitarian assistance and disaster relief last April.
He also voiced his hope that Minister Kishi will continue paying attention to and promoting the countries’ defence cooperation in a substantive manner that matches each side’s interests, for the sake of regional and global peace and development.
Prior to the online talks, Giang had a meeting with Japanese Ambassador to Vietnam Yamada Takio.