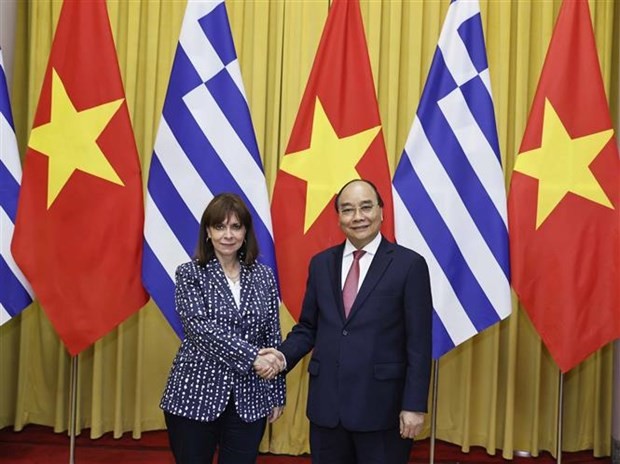 President Nguyen Xuan Phuc (R) and his Greek counterpart Katerina Sakellaropoulou (Photo: VNA)
President Sakellaropoulou lauded the important achievements that Vietnam has made during its struggle for independence and present process of socio-economic development. She affirmed that Greece highly valued the increasingly important role of Vietnam in the region and the world, and hoped to foster cooperation with Vietnam in all fields.
The two leaders agreed that the two sides should increase meetings and exchange of delegations at all levels among ministries, sectors and localities as well as the two business communities. They assigned the two ministries of foreign affairs to review and speed up solutions to promote the bilateral partnership.
President Phuc took this occasion to thank Greece for providing Covid-19 vaccines to Vietnam.
Both sides showed delight that despite impacts from the Covid-19 pandemic, trade between the two countries still increased to US$447 million in 2021, up 33 percent year on year, and two times higher than the 15 percent growth in Vietnam-EU trade.
The Presidents agreed to promote the win-win partnership, while encouraging and creating favorable conditions for businesses from both nations to strengthen exchanges, focusing on areas of Vietnam’s demand and Greece's strengths such as shipbuilding, maritime logistics, energy and agriculture. In order to create a framework for bilateral economic cooperation, they agreed to increase negotiations for a double tax avoidance agreement and another on maritime transport.
They pledged to increase collaboration in other fields such as defense, security, culture, education, sports, tourism and people-to-people exchange. President Phuc thanked Greek leaders and authorized agencies to create favorable conditions for the Vietnamese community to live, work and study in the country.
Vietnam and Greece agreed to continue to foster collaboration at international and regional forums, especially in the settlement of non-traditional issues such as pandemics and climate change within the mechanisms of the United Nations, the Asia-Europe Meeting, and ASEAN-EU Cooperation.
President Sakellaropoulou said Greece supports Vietnam in strengthening its partnership and comprehensive cooperation with the EU and further optimize the Vietnam-EU Free Trade Agreement (EVFTA), thus helping to enhance trade ties between Vietnam and Greece.
President Phuc highly valued Greece’s ratification of the EU-Vietnam Investment Promotion Agreement (EVIPA), and suggested that Greece supports and calls for the removal of the EU’s “yellow card” warning against Vietnamese seafood.
The two leaders also discussed a number of international and regional issues of mutual concern, including the maintaining of peace, stability, security, safety and freedom of navigation and aviation on the foundation of international law and the 1982 UN Convention on the Law of the Sea (UNCLOS).
Following the talks, the two Presidents met the press to inform them on the major outcomes of their talks, highlighting that the two sides agreed to coordinate closely to lift bilateral ties to a new height, while deepening cooperation in all fields and promote their supplementary strengths, and foster economic partnership and working together to make positive contributions to peace, stability, cooperation and development in the region and the world.