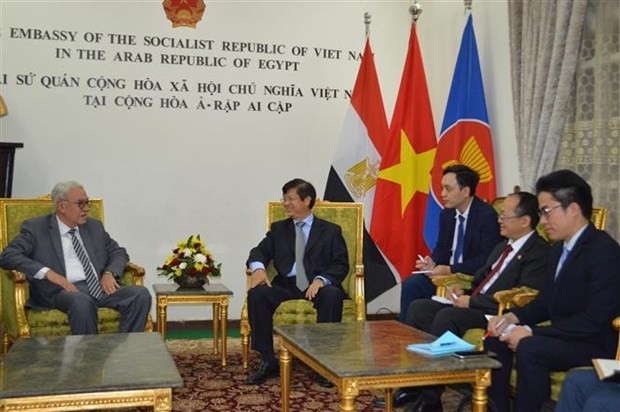 At the meetings, Nam briefed the hosts on Vietnam’s political and socio-economic situation, especially its marked development achievements over the past 35 years of Doi Moi (Reform), and the country’s foreign policy.
Vietnam and Egypt boast substantial potential for cooperation in different spheres, particularly economy, trade, investment, culture and tourism, he noted, suggesting the two sides further coordination to review and implement the agreements reached during high-level visits by their leaders in 2017 and 2018.
Speaking highly of Egypt’s role in the Middle East – Africa region, the official affirmed that Egypt is a potential partner of Vietnam, and expressed his belief that the two countries will step up the multi-faceted cooperation and mutual support at multilateral, regional and international forums, for the sake of their peoples, and for peace, stability, cooperation and development.
Egyptian hosts expressed their admiration for Vietnam’s socio-economic achievements, and their interest in the country’s reform policy and experience in politics, economy, social affairs, Party building and personnel training.
They shared the view that the bilateral cooperation outcomes in economy, trade and investment have yet to match the two countries’ potential, and suggested the two sides seek solutions to enhance the bilateral ties in the areas of their strength.
Hosts and guests also looked into other issues of shared concern like climate change and food security.