Canadian and Australian ambassadors and military attaches to Vietnam also took part in the talks.

During the talks, Vinh informed the Australian and Canadian officials on the COVID-19 situation in Vietnam, attributing the good outcomes in controlling the disease to concerted efforts of the entire political system, with the Vietnam People’s Army serving as the core and vanguard force.

Highlighting the importance of international collaboration in the fight against the pandemic, he thanked Australian and Canadian defence bodies’ cooperation in sharing information on COVID-19 prevention, control, research and treatment. He hoped the joint work will last for long given the COVID-19 complexities.

On the occasion, Vinh and his counterparts reviewed outcomes of Vietnam – Australia and Vietnam – Canada defence ties in the past time and sought agreement on future orientations with a stress on military medical coordination in disease prevention and control. All sides vowed that they will not allow the pandemic to hinder their thriving cooperation. 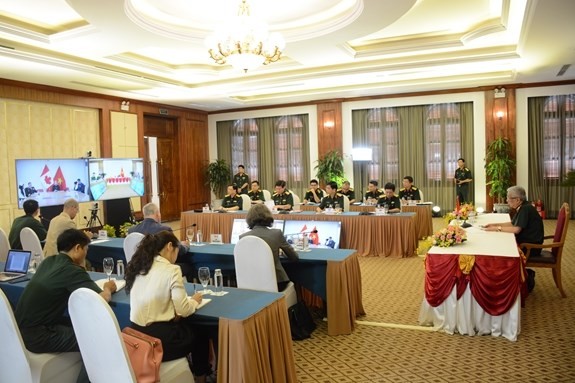 At the talks with Jody Thomas, Deputy Minister of Canada’s Department of National Defence (Photo: VNA)

The Vietnamese and Canadian officials expressed their delight at breakthroughs in the relations of the sides after their defence ministers exchanged visits, particularly in human resources training and UN peace keeping mission.

The Canadian side said it plans to set up a military attaché office in Vietnam this year, and the two sides agreed to push for the establishment of a bilateral defence policy dialogue mechanism toward building a 3-year cooperation scheme for the two defence ministries.

Meanwhile, Vietnam and Australia took note of outstanding joint work, such as Australian military aircraft, for the second time, transporting personnel of Vietnam’s level-2 field hospital to South Sudan for peacekeeping mission. The sides also began teaming up to organise activities in searching for Vietnamese soldiers going missing during wartime, shooting skills exchanges; and discussions on women, peace and security.

Vinh stated Vietnam’s Defence Ministry is committed to the effective implementation of defence cooperation with Australia and Canada based on signed documents and agreements for the benefit of the sides involved and of the region.

The official also informed his counterparts on the schedule of activities during the year Vietnam serves as Chair of ASEAN (2020) and its tenure as a non-permanent member of the UN Security Council (2020-2021).

He highlighted Vietnam’s determination in strengthening collaboration within the framework of the ASEAN Defence Minister’s Meeting (ADMM) and ADMM Plus.