Accordingly, the project was started construction in November 2017 with total investment capital of nearly VND220 billion (US$9.5 million) from ODA loans of the World Bank.

The new Quang Trung Bridge has a length of 869 meters and a width of 11 meters with two lanes for vehicles, connecting Cai Rang and Ninh Kieu districts which previously started operation in January 2020 to wait for upgrading process of the current bridge. 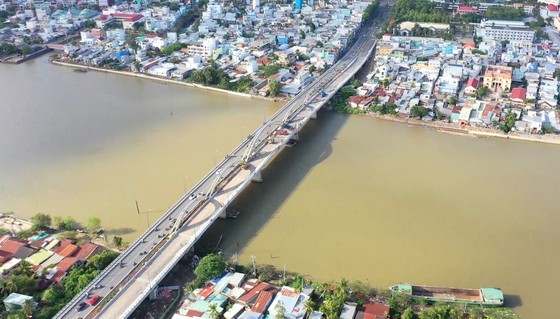 After one-year construction, the upgrading project of the old Quang Trung Bridge was officially completed and accompanied with the new one.
After coming to exploitation, the Quang Trung Bridge will help vehicles from the center of Can Tho city connect to the IC3 intersection in Hung Phu Vard, Cai Rang District, then easily go to Ho Chi Minh City or to Ca Mau Province on the National Highway 1A .

Can Tho City has designed three bridges crossing Can Tho River including Quang Trung Bridge, Hung Loi Bridge and Cai Rang Bridge up to now.

It is expected that Can Tho City will have Tran Hoang Na Bridge by 2023 with four lanes. The project was started construction in September 2020 with a total investment of over VND7,800 billion (US$339 million), is considered as the fourth bridge across the Can Tho River connecting to the southern gateway of the city.

By Tuan Quang-Translated by Huyen Huong