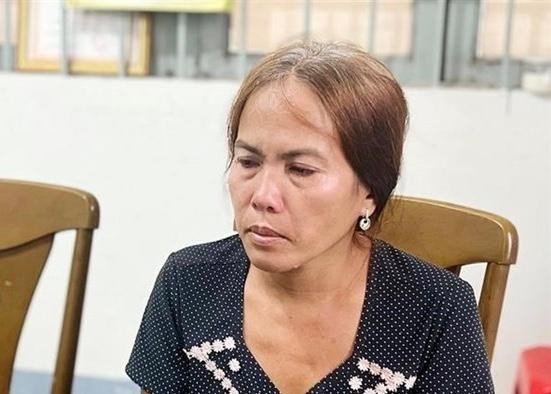 Nguyen Thi Le (Photo: VNA)
According to Colonel Dinh Van Noi, Director of the provincial Police, the suspects are Nguyen Thi Le, born in 1980, and Le Van Danh, born in 1988, both residing in Long Binh township, An Phu district of the Mekong Delta border province.
The agency also launched criminal proceedings against the two and the case. The above decisions have been approved by the People's Procuracy of the same level.
Forty Vietnamese nationals, comprising 35 males and five females, were arrested by An Giang border guards on August 18 after illegally entering Vietnam from Cambodia. According to their testimony, they tried to escape from a casino in Sampeou Poun commune, Kaoh Thom district, Kandal province in Cambodia and swam across Binh Ghi River to return to Vietnam. They said they had previously fled to Cambodia to work at a casino. Their job was to make online games and go to social media websites at the instruction of the people at the casino but they were constantly forced to work overtime without any payment.
Initial investigation results showed that six of them were illegally brought to Cambodia by Le and Danh.
Le admitted that around May this year, she was asked by an unknown man to take part in illegally bringing people out of Vietnam to Cambodia. Le then worked with Danh to organize the illegal exits. Danh took people to the river bank on the Vietnamese side, and Le transported them to Cambodia. The pair were paid VND100,000 (US$4.27) per person successfully brought to Cambodia.
In addition to the six people, Le also admitted that she and Danh have conducted many other illegal exits for working in Cambodian casinos.
Further investigation is underway.